The Mayor of Greater Manchester Andy Burnham was a special guest at East Cheshire Hospice meeting patients, staff and volunteers.

Mr Burnham toured the Hospice which has cared for thousands of patients with life-limiting illnesses since it first opened its doors 34 years ago.

His links with the Hospice were strengthened in June 2021 when he appeared as a guest in the charity’s special virtual event series Meeting of Minds, hosted by the BBC broadcaster Nick Robinson.

The series is part of the fundraising for East Cheshire Hospice’s Coordinated Care Service, which has been developed to help guide both the patient and their family through the complexity of end-of-life care. 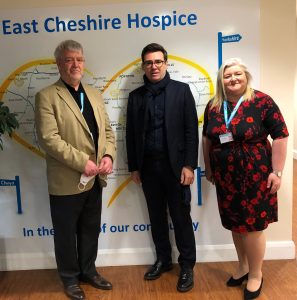 From left, Chair of the Hospice’s Trustee Board Will Spinks, Andy Burnham and Hospice Chief Executive Karyn Johnston.

East Cheshire Hospice launched a Hospice @Home service in 2017, allowing patients to die in their own home should they wish.

The service has been hailed as a great success and the Charity’s Coordinated Care Service aims to build on that platform by further integrating different health care agencies to aid patients, families and carers at such a vital time.

The Coordinated Care Service will be resourced by highly-trained and experienced palliative care staff available 24 hours a day.

These experts guide families through the complexity of the health care system, instilling confidence at the end of a phone and taking the stress out of crisis situations.

Andy said:  “It was fantastic to visit East Cheshire Hospice after having been involved in their Meeting of Minds series last year, and meeting some of the staff and volunteers in person has been inspirational.

“I was particularly pleased to support the Meeting of Minds fundraising initiative for the Hospice’s Coordinated Care Service which will focus on patient-centred care and help simplify the often confusing and difficult processes involved in palliative care.”

“We’re so grateful to Andy Burnham and all those who supported the fundraising efforts to help make co-ordinated end-of-life care a reality for the people of East Cheshire.”

Mr Burnham, a former government health secretary,  is a passionate supporter of the work undertaken by the Hospice sector and the holistic care it provides.