Round-the-world sailor Heather Broadbent is back!

Round-the-world sailor Heather Broadbent is back with her crew in the Philippines adjusting to life at sea again.

A spell in quarantine is followed by sea trials on board their yacht GoToBermuda which has been in the same port since early 2020.

The Clipper Round the World Yacht Race resumes on March 20 with the Pacific leg to Seattle. 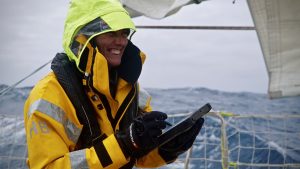 Heather Broadbent who is back in Asia ready to resume her epic voyage.

Heather is keen to reach her £40,000 fundraising target for East Cheshire Hospice. Her late husband Adam was a patient there.

For Heather getting back on board has been a challenge in itself. She said: “Lockdown has been difficult mentally for everyone and at times it was hard thinking I could ever go out again, let alone sail across oceans.

“The thought of even going to the shops was tough at times, but now I’m excited to get back out there and prove to myself I’m still capable of adventure.

“The boat practice is to get to know the new crew and check that everything is still working like it should be. We’ve got a few days spare for any repairs needed before the race re-starts.

“Sailing across the Pacific is the ultimate challenge and the sad thing is I won’t be joined by some of my original crew members who’ve been unable to reorganise their lives, but I’m excited to meet the new crew joining us.”