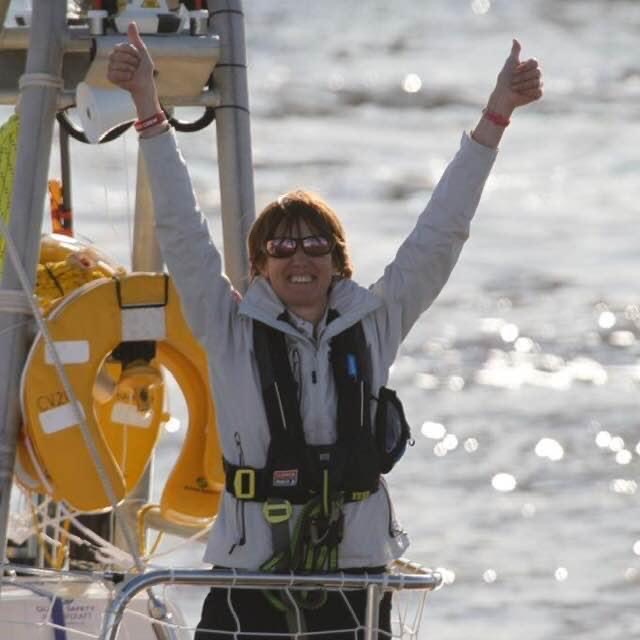 Heather was one of only two crew members who completed every leg of the 48,000-mile journey on board the yacht GoToBermuda.

She has raised almost £31,000 for East Cheshire Hospice where her late husband Adam (45) was a patient.

Heather is still hoping to get close to her fundraising target of £40,000 for the Hospice @Home service.

The Disley landscape gardener travelled to the Philippines in February to resume a race delayed for two years because of the pandemic.

Before the break, she had sailed to South America, South Africa and Australia.

Once the race resumed, she raced across the Pacific to Seattle, through the Panama Canal to Bermuda and on to New York before Derry/Londonderry and finally finished in London.

Heather said: “I’m so relieved it’s all over. I was wary about going back after such a long break due to the Covid outbreak, but am so pleased I did.

“I would have kicked myself if I’d not finished it off. I enjoyed the second half of the race better than the first and the sailing more after I went back.

“Crossing the North Pacific was the highlight, it covers so much of the planet, while the Panama Canal was an adventure in itself.

“We came second on the leg to Bermuda which until then was our best finishing position. It was our team homecoming, we were greeted like conquering heroes. The buzz and vibe was amazing.

“We then came first on the Atlantic leg, recording the fastest time in the history of the Clipper Race for that crossing which took us 13 days.

“Lastly, we sailed over the top of Scotland to London through the Pentland Firth, a strait near the Orkneys which can be quite treacherous.”

Heather will now enjoy a well-earned rest. She said: “I’m going to press reset and spend some time in my garden and have a think about what’s next.

“At the moment I’ve no great plans to go sailing again, but never say never.

“It would be great to get closer to my fundraising target and I’ve had a few more donations with the race ending.

” Supporters can still donate because Hospice @Home is such a wonderful service.” 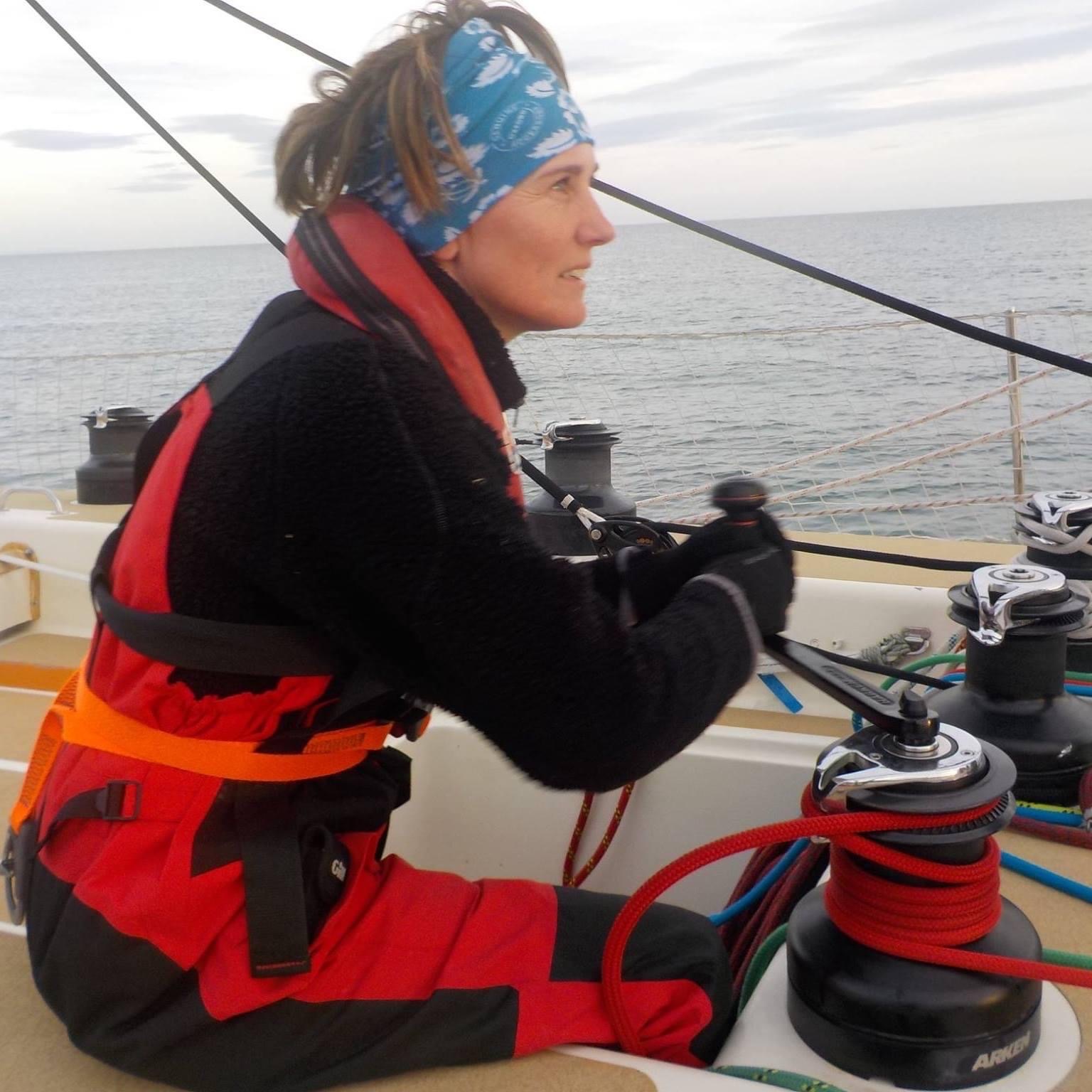 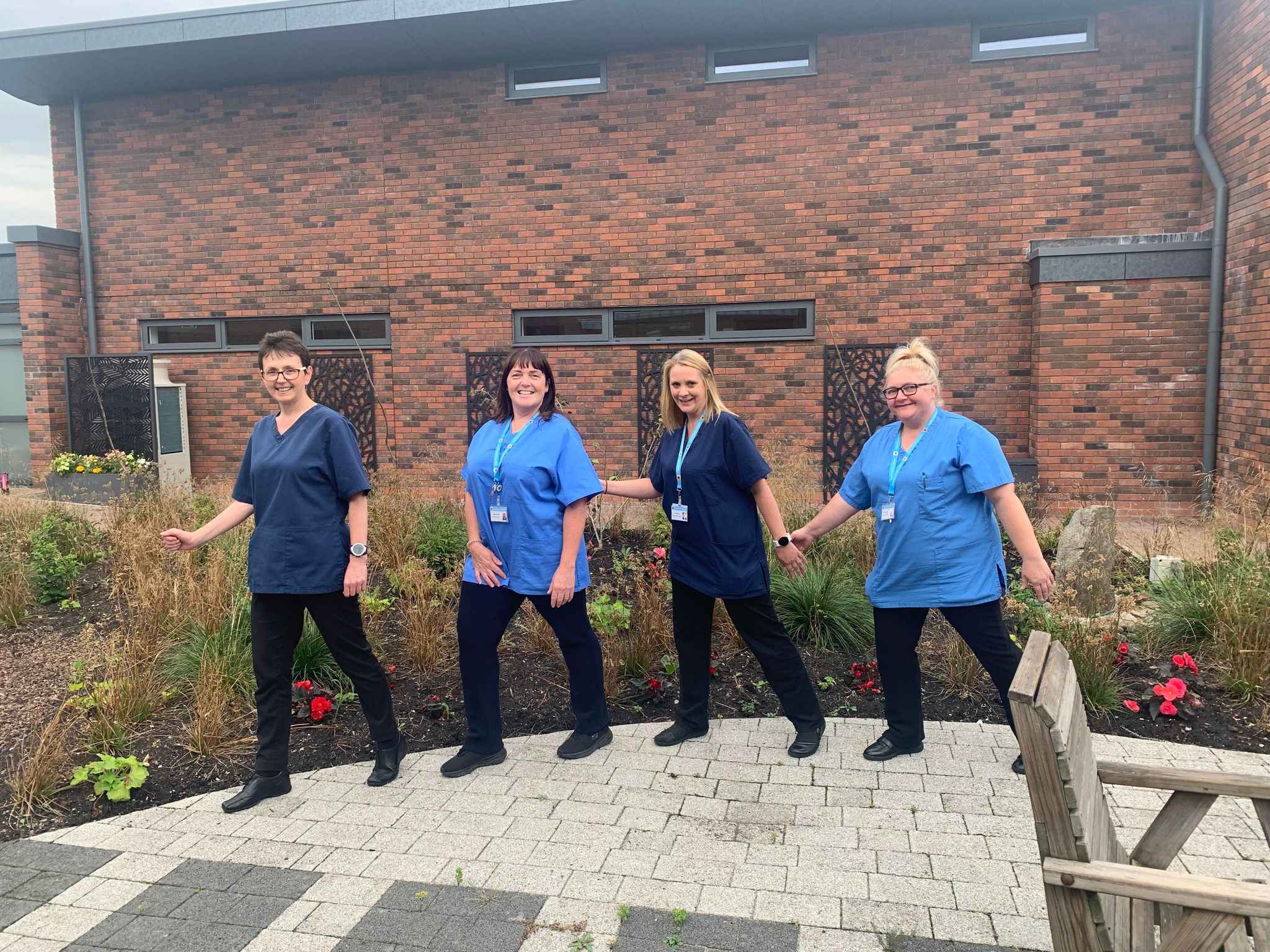 Do you count how many steps you walk each day?

East Cheshire Hospice is asking supporters to take one step a day for every £1 needed to run the Hospice.

The Steptember challenge – in September – involves 7,500 steps a day, reflecting the amount of money needed to keep the Hospice going daily.

To sign up visit the Hospice website where walkers can also set up a JustGiving page to help with fundraising.

Challenge Events Coordinator Bethan Wade said: “In the 30 days of September, we’re asking you to strap on your walking boots for this fun, fitness, fundraising challenge.

“Everyone who registers receives a pack including a t-shirt, wristband and a step totaliser to help you keep track of progress, plus other handy items.

“If 7,500 steps a day sounds too much, don’t worry. Taking part is the main thing and if you’d prefer to set a lower target that’s fine.

“We’re not asking people to raise £7,500 with their challenge because that’s an awful lot, but every penny helps.

“So we’d encourage participants to tell everyone what they’re doing and why, and ask them if they’ll sponsor them. Our web page has a quick guide on using a smartphone to track steps.” 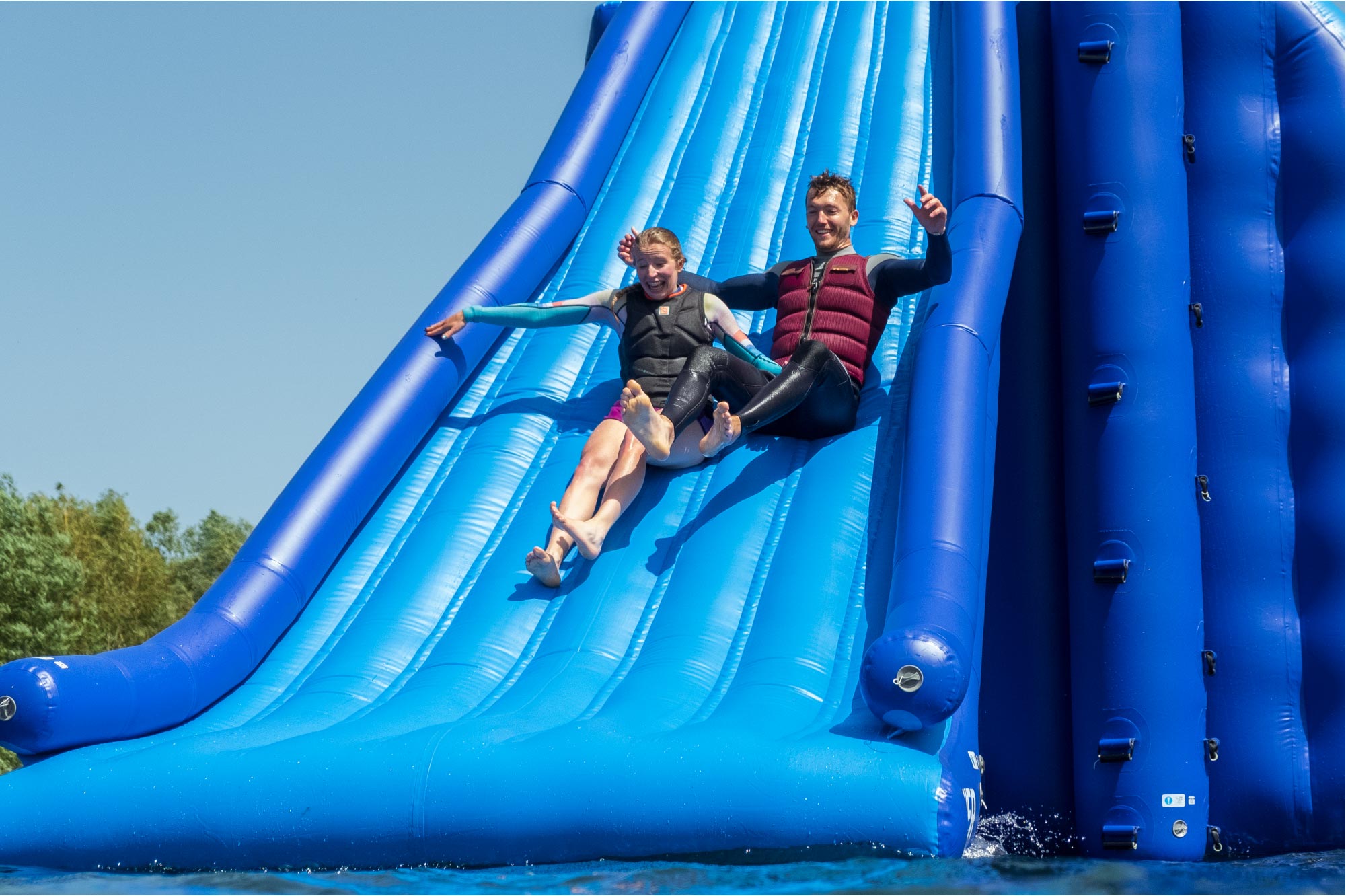 Fancy splashing your way round an aqua park to support East Cheshire Hospice?

The Hospice has organised a trip to Wild Shore Aqua Park at Delamere for its next fundraising adventure. 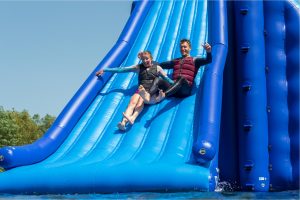 Wild Shore is a giant floating playground on a lake with various obstacle courses and slides.

Hospice fundraiser Bethan Wade said: “It’s the first time we’ve organised such an event and we’re hoping as many of our supporters can join us there.

“It’s a fun, safe and exhilarating experience for a range of ages and abilities. There are also steps which allow easy access from the water back on to the aqua park.”

An ability to swim 25 metres is needed to take part.

The Hospice suggests participants set a target of raising £25 in sponsorship to support them.

Visit the Hospice website to book or to reserve a group email events@echospice.org.uk or call 01625 666998. Both time slots can be booked by completing two registrations. 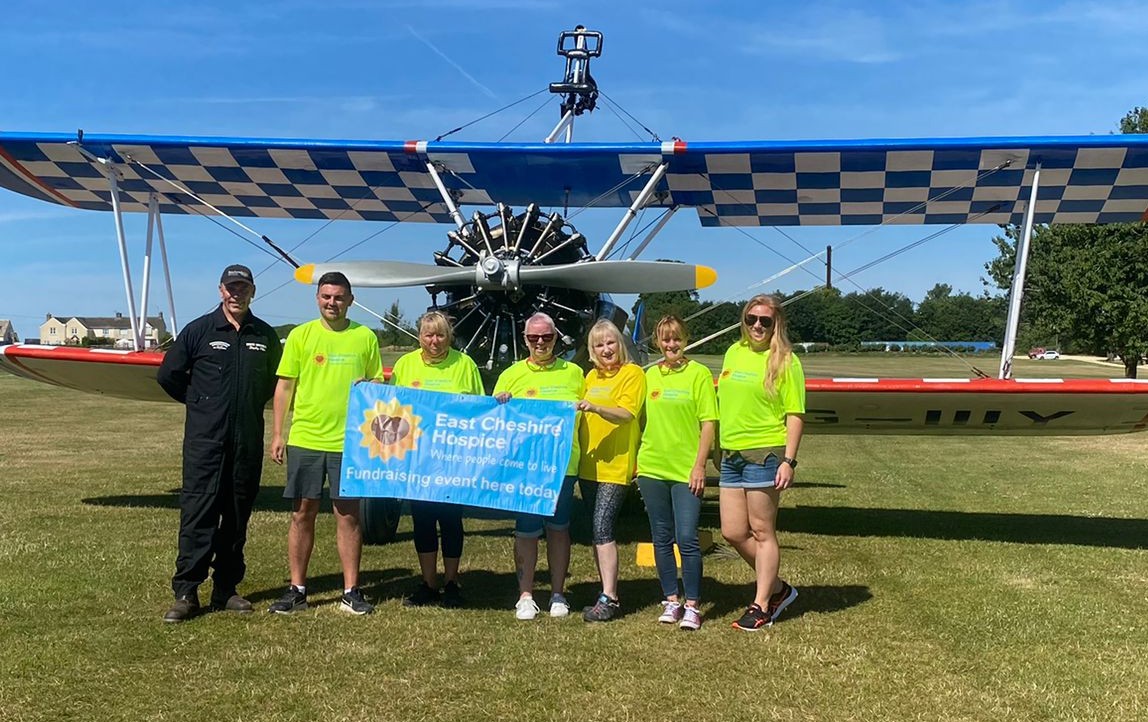 Thrill seeker Ali Mitchell has vowed to return to the skies for more after her wing walk debut.

Next time the district nurse will be attempting loop-the-loops on to the top of a biplane.

Ali, from Hurdsfield, joined other daredevils at an airfield in Gloucestershire, all raising money for East Cheshire Hospice.

Ali said: “It was amazing and something I’ve always wanted to do. I’ve done a sky dive before and I’m a bit of an adrenalin junkie, so it was on my bucket list and have ticked it off now.”

She said: “It was a pleasant experience, but I was waiting for an adrenalin rush and didn’t get one. 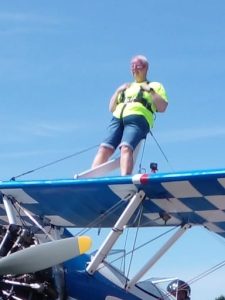 “Maybe it was because pilot was fantastic at what he was doing, or that it was such a beautiful day and very calm up there.

“I didn’t even feel the plane landing. Next time I’ll do the loop-the-loop for a bit of a tummy flip. They’re only allowed on a second flight.

“The experience is so safety conscious and you’re so well strapped in. A couple of others chose a more thrilling ride with the plane on its side, but I wanted it more sedate for the first time.

“The instructors were fantastic and I can’t praise them enough, they were brilliant.

“I was also wearing shorts so next time I might wear long pants as my skin was wobbling a bit and the worst part was climbing on to the wing.”

Ali has close ties with the Hospice. She said: “I work out-of-hours as a nurse so liaise very closely with the Hospice @Home team and that’s how I know how amazing they are.

“It’s a fantastic resource that we’ve got in our area and we’re so lucky to have it. I had a friend who passed away in there unfortunately in her 40s. 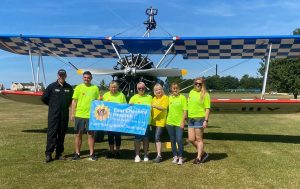 “I think it’s appalling they have to rely on charity to fund them and we should all try to do as much as we can to support the Hospice.

“I know money is tight at the moment and people are being generous with sponsorship.”

Husband Joey saw Ali take to the skies, promising to join her next time.

Meanwhile, Ali is signing up for a sky dive organised by the Hospice on Saturday, May 13, with full details announced soon.