Heather Broadbent’s Around the World Challenge

Landscape gardener Heather Broadbent is preparing for her ultimate adventure – sailing round the world!

The mum of two is taking to the high seas as one of the crew of a 70-foot ocean racing yacht in the Clipper 2019-20 Round the World Yacht Race.

Heather will travel 40,000 nautical miles on her epic 11-month voyage from August.

The route from England takes her via South America, South Africa, Australia, China and the USA. 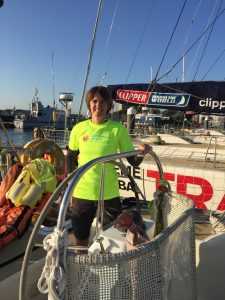 Heather is raising funds for East Cheshire Hospice and hopes to raise one pound for every miletravelled.

Heather, from Disley, is supporting the Hospice after it cared for her late husband Adam (45) who died of cancer in 2013.

Heather said: “The Clipper Race is for amateurs and I’m a sailing novice. I’ve been into boats all my life but nothing like this, I’ve loved every minute out on the water since I started my formal training, although I did get horrible seasickness one night when I was disoriented.”

“I was 50 last April and realised it was my time for an adventure. It’s the most dangerous, exciting and terrifying thing I’ll have done and I’m quite nervous.”

“At first I was considering doing only one of the eight legs, just the one across the Atlantic but then decided to sign up for all of it. The hardest part will be being away from family but my two daughters are now grown up and they are both very supportive.”

“My dad Bob is a charter skipper in the Isle of Man taking wildlife and bird-watching trips and after spending his life on the water he’s looking forward to hearing about my adventure.”

Heather is trying to raise £40,000 specifically for the charity’s popular Hospice @ Home service that was set up in 2017.

Heather said: “Hospice @ Home wasn’t around when Adam was a patient at the Hospice and this amazing service would have been an enormous help caring for him. I want to raise awareness and any sponsors will be directly helping the Hospice.”

Heather and her friends have already raised £100,000 for the Hospice and The Christie from themed events.

* To read Heather’s blogs and support her go to eastcheshirehospice.org/heather.