One of the most important corporate supporters of East Cheshire Hospice has been awarded a specially designed trophy thanking them for their ongoing fundraising work.

The Macclesfield pharmaceutical company, AstraZeneca, has been a loyal supporter of the Hospice since the Millbank Drive facility first opened its doors in 1988 and were one of the original founding businesses who contributed to the building costs.

Employees at the AstraZeneca sites have helped to raise funds for the Hospice over the last 30 years and raised a stunning £26,000 last year alone.

To mark the company’s ongoing support, Hospice Director Karyn Johnston, recently presented AstraZeneca with a specially made trophy designed in the shape of the Hospice logo – the sunflower.

“Over the years, employees from AstraZeneca have been superb friends to the Hospice and we wanted to thank them in a special way. It was an honour to host their visit and to personally acknowledge all their support over the last three decades,” said Karyn.

“We need to raise over 80 per cent of our running costs each day and we can’t do this without the fantastic support of our corporate supporters”. 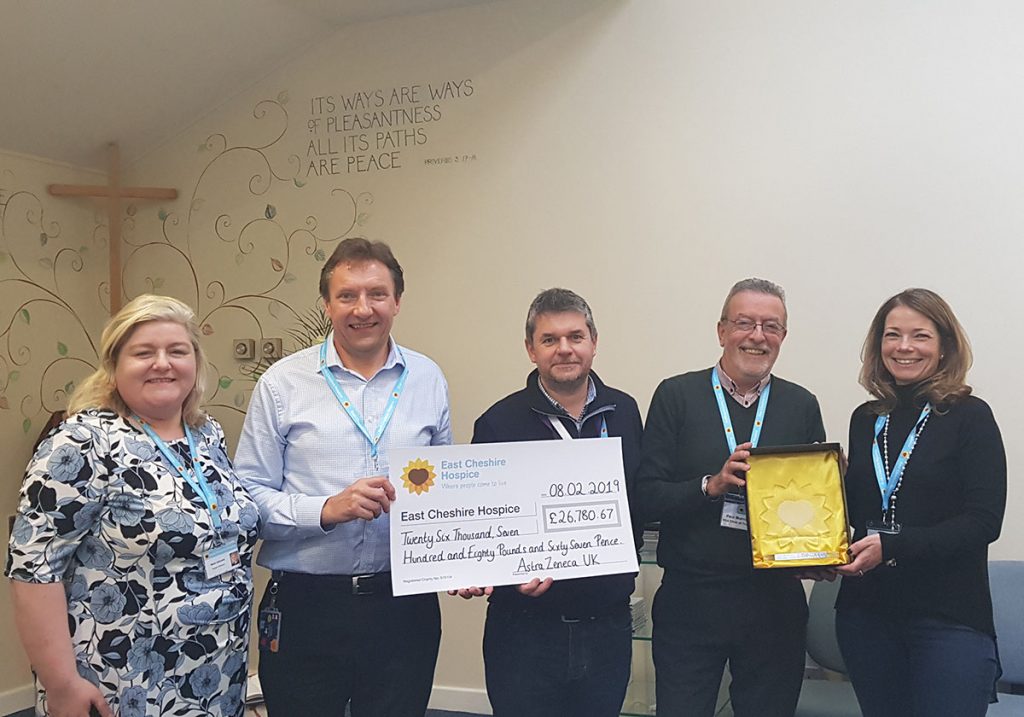 Juliette White, Vice President Global External Sourcing, AstraZeneca, said: “I am very proud that AstraZeneca is part of supporting the important work done by East Cheshire Hospice. Many of us within the community are touched personally by the outstanding work the Hospice does everyday”

Community Involvement Champion at AstraZeneca, Colin Bath, said: “The range of fundraising events has been truly phenomenal ranging from cake sales to sponsored haircuts and from film nights to Christmas party donations. We are very proud to have supported the hospice in 2018 and we will once again make it our Charity of Choice in 2019”

Dozens of AstraZeneca employees have undertaken their own fundraising and there are regular company-organised events to raise funds such as the Alderley Park Farm Weekend .

At a special event at the Hospice, Karyn welcomed senior staff from the company to talk about the work of the Hospice and future plans. Karyn was joined by her clinical director colleague, Sarah Dale and Sandra Jones, who has a connection with the company having previously worked as a research nurse at AstraZeneca, working on clinical trials with oncology drugs.