Who is Sunny?? - East Cheshire Hospice

Just who is Sunny, the East Cheshire Hospice mascot who features in a new comical online video?

Sunny the dog is featured promoting the Challenge Series of events which inspire hundreds of people to push themselves every year to raise funds for the Hospice.

Sunny is seen in the gym, at an aerobics class, weightlifting, swimming, trekking through the snow and even doing some pole-dancing in the three-minute video which is featured on the Hospice Facebook site.

“My cover is blown,” says 26-year-old Jack Layden who can be revealed as (one of) the faces behind Sunny, the Hospice mascot. 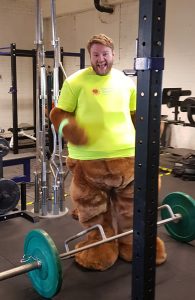 Jack, a digital marketing assistant at the Hospice, said the three days of filming certainly took him away from his usual desk job as he worked with the videographer, Richard Weston, at a series of locations around the town.

“It was pretty exhausting work,” he says. “It’s incredibly hot in that costume and pretty difficult to move around. The pole-dancing wasn’t my finest moment – I kept falling over,” says Jack admitting that the out-takes make for some hilarious viewing.

“I don’t think Hollywood will be knocking on my door anytime soon,” he laughs.

The Hospice Challenge Series 2019 features a host of London to Paris bike ride, a week-long trek in  Nepal in November and a host of other races and runs.