Corporate Challenge 2019 was a brilliant success!

East Cheshire businesses have gone head to head in a corporate challenge which tested their money-making abilities.

The challenge was to turn £100 into as much profit as possible over a month by devising and taking part in fundraising activities to raise funds for East Cheshire Hospice.

The winning company, McCann Health Medical, rose to the challenge with a flurry of fundraising activity with employees throughout the company supporting their King Edward Street colleagues to raise £3,240.

Their Global President, Charlie Buckwell, said the company was delighted to win the challenge.

“We are very proud to support such an important cause as East Cheshire Hospice, and the incredible work they do,” he said.

Lucy said: “It was a really fun way to ignite some friendly competition and be creative, all in honour of raising money for an amazing cause.”

And Chris, who took part in a 10K run to raise money said: “Winning the corporate challenge collectively as a company seems to have been a win-win for everyone, as we raised money for an incredibly crucial and worthwhile cause.”

And Melanie Garfitt from the company’s social events team echoed the sentiments. “From start to finish, we found the challenge very rewarding as a company. We tried to make sure the real winners were East Cheshire Hospice.”

The team award for the most creative ideas went to Pan European Networks, a digital publishing company from Congleton where all 26 members of staff took part in a host of fundraising events from cycling the equivalent of Land’s End to John O’Groats at a gym, to dressing up in Game of Thrones outfits for the day.

Their general manager, Stephanie Davies, helped organise the company challenge which raised almost £1500 for the Hospice.

“By far, I think our most popular fundraiser was the raffle for three-days holiday!”, she said. “As a cancer survivor, I was lucky enough to access the facilities at the Hospice 13 years ago, and many of us in the company were keen to support their work.”

Other businesses that took part in the challenge were Context Public Relations; Bioscript; Chess ICT and Ashfield Healthcare Communications and together all the businesses raised almost £8500. 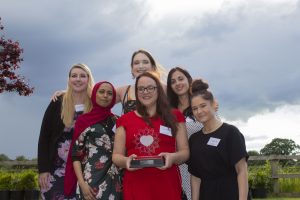 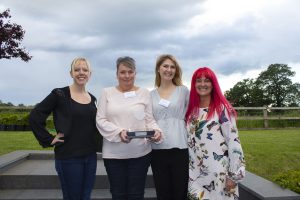