The staggering sum of £54,000 raised for East Cheshire Hospice from a glitzy ball shows the love for the charity from within the community.

That is the view of the What Women Want group who announced their post-lockdown return to major fundraising events in spectacular style.

Their Cranage Hall bash raised £27,000 on the night – a total generously match-funded by a close friend and benefactor.

The group will buy a second new car for the charity’s Hospice @Home service, having also funded a first car. Proceeds will also decorate a lounge for patients and families. 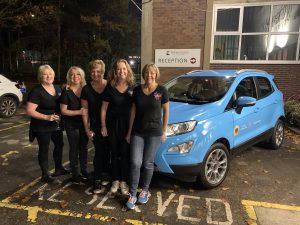 Group chair Jayne Carter said: “It was good to be back and we had a brilliant evening. The overriding impression from the night was just how much love there is out there for the Hospice, everyone was so generous.

“It’s an amazing amount raised and we can’t thank all of our sponsors enough along with everyone who attended the event and made it such a special occasion.

“It’s been a difficult couple of years for everyone and we’re so thrilled to have raised so much money.” A diamond pendant from P R Jones Jeweller was also raffled off.

Hospice Chief Executive Karyn Johnston said: “Yet again the What Women Want have shown what marvellous supporters they are of the Hospice. We can’t thank them enough for their long-standing dedication and hard work.”

The other members of WWW are Julie Barnes, Jo Millward, Jill Harding and Elaine Burgess.