A Jingle Bell Jog brought festive sparkle to the smiling faces of children across Macclesfield. Almost 10,000 youngsters took part in a sponsored run or walk to raise much-needed funds for East Cheshire Hospice.

Some 48 organisations, mostly schools, joined in the fun despite bad weather and wore festive headwear. Nurseries and beaver groups also tackled their own routes. All Hallows Catholic College has raised more than £12,000 for the Hospice from the event over the years.

Its year 7 students were out in force again, with 200 pupils braving wind and rain for a bracing jog around the school playing fields. 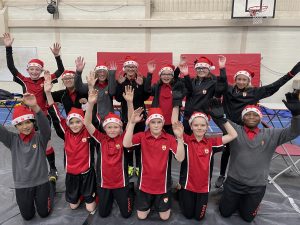 Year 7 pupils at All Hallows Catholic College prepare for the Jingle Bell Jog.

Sophie Thomason, assistant faculty leader of PE, said: “We’ve done this event every year for the last 10 years or so. It’s important to support a charity like the Hospice, especially as it’s so close to home.

“Like many other charities, the Hospice income has been affected by Covid.  Pupils entered into the spirit of the occasion and we thank them for their enthusiasm, and parents and families for sponsoring them.”

The Jog was emotional for nursery practitioner Teigan Caldwell. 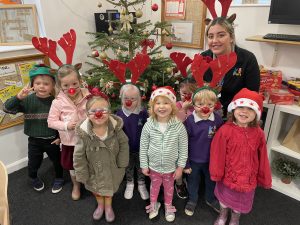 She took toddlers from Kids Planet where she works around West Park, only a few days after losing a close friend.

Tiegan said: “The care provided by the Hospice for her was amazing. I was dreading doing the Jog, but it was something I needed to do and it was poignant for me.

“Our children who took part are three or four years old and I’d like to praise them for their efforts and those who sponsored them.”

Hospice community fundraising assistant Claire Gorton said: “We’ve been overwhelmed by the support from schools and groups who’ve been inspired to raise money for a great local cause.

“Participants range in age from nursery level to college students and they come from Macclesfield, Wilmslow, Alderley Edge, Kettleshulme and Congleton. The fact 10,000 children have been involved is fantastic.

“We’re so grateful to everyone who’s taking part, or has helped by sponsoring someone who’s participating.

“It’s been another difficult year for everyone and East Cheshire Hospice and schools are no exception. The funds raised will make a big difference and thank you so much to everyone who’s contributing.”

Headwear for the Jingle Bell Jog represented Elf, Snowman, Reindeer and Santa. Last year it was known as the Reindeer Run and next year it will be the Elf Run.