A tasty colourful cocktail is giving a special kick to Shrigley Hall’s charity push this year.

The Shrigley Sunflower was created by Andy Gaskell, head bartender at the hotel and spa, to celebrate the venue’s support for East Cheshire Hospice.

The drink – vodka, peach snaps, pineapple and orange juice, lemonade and a touch of Blue Curacao – is named in honour of the charity’s well-known floral emblem. 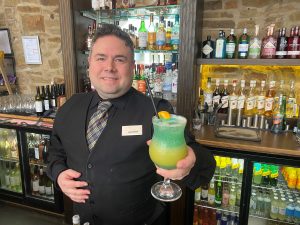 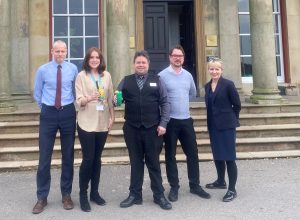 Shrigley Hall has chosen East Cheshire as its nominated charity of the year and wants to mark its support in style.

A golf event on Tuesday, June 21, starts at 5 am with the last tee off time at 5 pm to take advantage of the extra sunlight.

The Longest Day Golf Open is open to members and non-members.  The individual event will be played over the rolling hills at Shrigley Hall, regarded as one of the most scenic courses in Cheshire.

Food and drink is included in the £40 entry fee with on-course prizes. To enter call 01625 575626 or email golfpro@shirgleyhallhotelandspa.co.uk.

The hotel is hoping customers will also support its commitment to the charity in other ways as well.

An optional £1 charitable contribution will be made from a brochure which lists different walking routes around Pott Shrigley village and beyond. Guests use the hotel as a base to enjoy popular challenging woodland walks.

The hotel will also invite guests to round up accommodation bills with the difference donated to the Hospice.

In addition, eight staff members have volunteered to tackle the Yorkshire Three Peaks challenge in September. To sponsor them visit justgiving.com/fundraising/vicky-marshman1.

Hotel general manager Vicky Marshman said: “We’re excited to be raising funds for East Cheshire Hospice throughout the year and are hoping our customers will also play their part in supporting us in various ways.

“The magnificent facilities at Shrigley Hall Hotel and Spa attract guests from near and far and we all recognise the wonderful work done by the Hospice for its patients, their families and carers.

“We’ve a record number of golf members who’ve traditionally supported the Hospice and we’re inviting golfers, including societies, to enjoy our stunning course by playing in our Longest Day Golf Open.”

Shrigley Hall, with 155 bedrooms, opened a new spa facility with an outdoor infinity pool in 2020.

The historic hall, built nearly 200 years ago, was converted into a hotel, spa and golf resort in 1989.