Retired nurse Janet Dean has a powerful personal story about how East Cheshire Hospice has helped her family over the years.

Her late mother and late husband were cared for by the charity, which is now asking others to also share their own experiences.

The request is part of Dying Matters Week (May 2-6), a national campaign run by Hospice UK to encourage people to talk about death and grief more openly. 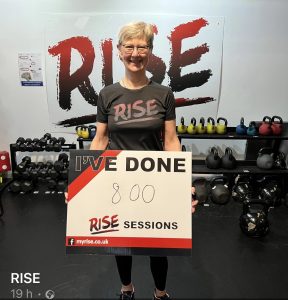 Janet Dean who has attended more than 850 sessions of an exercise class to help cope following the loss of her husband Peter.

The Hospice want to hear from current users of its services, plus friends and relatives of former patients. The aim is to make families feel comfortable with Hospice care.

Janet said: “Obviously a patient would prefer not to become part of the family there, but whether as a relative, patient, staff, or volunteer, it’s like being part of a big family. The Hospice gathers you in and embraces you.

“The Hospice motto is ‘where people come to live’ which was the case for my mother and husband and other relatives I’ve lost there.

“Mum’s first stay was for symptom management. I remember her saying to me ‘It’s like a five-star hotel. They even ask you what you want for your meals.’

“I worked in the NHS for many years. I’d pop in after work, and as a Ward Sister on an acute medical ward at the time, it was always so peaceful at the Hospice. The care the staff were giving I could only dream of on my busiest day.”

“The care is not just about doctors and nurses. It’s holistic. Focusing on emotional and spiritual care as well as practical needs. Peter especially gained peace from Reflexology. This surprised me, as he wouldn’t even let me cut his toenails, he was so ticklish!” 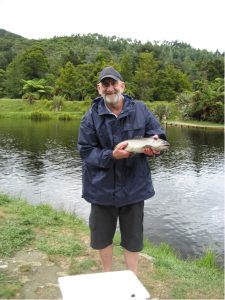 Peter Dean after catching supper on a holiday in New Zealand in 2013.

The couple donated to the Hospice to support its opening in 1988, the start of a long-standing fundraising association. Janet has now volunteered as a ward clerk and receptionist for five years.

Beth England, Individual Giving Fundraiser, said: “Sharing your experience can help so many future families who may feel worried, or unsure, about hospice care.

“If you’ve experienced the care and support of East Cheshire Hospice, either first-hand, or as a family member or friend, we’d love to hear your story.”