Round the world sailor Heather Broadbent

Round-the-world sailor Heather Broadbent is raring to go again as she prepares to set sail on her epic voyage.

She is determined to finish the race – and reach her £40,000 fundraising target for East Cheshire Hospice.

Heather has already raised £30,000 for the Hospice where her late husband Adam (45) was a patient.  Funds raised will go towards Hospice @Home services.

She flies out to the Philippines in late February where she will resume the Clipper Round the World Yacht Race a month later.

The event was halted for two years because of the pandemic and the route has been changed with three China stops cancelled. 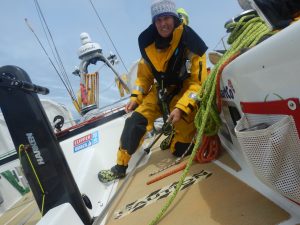 Heather Broadbent on her voyage.

Heather, a landscape gardener from Disley, said: “I’m keen to finish what I started both for myself and the Hospice. I’m excited and nervous, but the big goal has always been to get across the Pacific and then we’re homeward bound.

“The Hospice needs the funds now more than ever because of the loss of fundraising revenue caused by Covid-19, so I’m grateful for any donations.

“I set a target of £40,000 because that’s how many miles the race will eventually cover.”

Heather and her crew on board their yacht GoToBermuda will cross the Pacific en route to Seattle before reaching Bermuda in June.

Then it is off to New York before the final Atlantic leg eventually back to London in July where Heather’s voyage began almost three years earlier.