Growing a moustache is always a hairy experience for pilates teacher Mark Leah.

That is because he usually gets a look of horror from family and friends when he unveils his latest design.

They will be relieved Mark is staying clean shaven until he launches his next Movember charity challenge.

It will be his 10th successive year during which time he has raised more than £10,000 for East Cheshire Hospice. 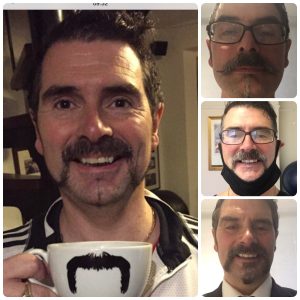 A few of  Mark Leah’s many appearances.

Mark, from Macclesfield, said: “It’s good fun for little work for a local charity and people are so generous. At the end of the day it’s only a moustache and it’s not as though I’m doing anything too strenuous.

“The moustache is a nuisance to be honest and it’s great to be able to shave it off afterwards. My wife Margaret is much happier once it’s gone.”

Mark often keeps his black moustache well into December for effect at Christmas parties, a move that invariably tops up his fundraising.

He has just presented a cheque to the Hospice for £830 from his latest effort.

The most he raised was £1,369 in 2019 before lockdowns and face masks which hide his moustache from pilates students at Trinity House physiotherapy practice where he is based.

Mark said: “People forgot I was growing a moustache, so it was a bit of nightmare. I then found a really good mask with a Mexican moustache, but unfortunately it scared too many people who said it was putting them off.

“I change my moustache every week if possible. It’s been bright red but the dye wouldn’t wash out of the bed sheets for weeks. I’ve also had it in stripes, with chunks cut out and even got a hairdresser to turn it into a bat shape once.

“I judge it on the reaction of my daughter Gemma and son Jamie. If they say ‘dad you can’t go out like that’ I know it’s daft enough and I’ve got an effect.”

Mark took part in memory walks with his late father Frank while father-in-law George Calnun died in the Hospice in 2009. He said: “The Hospice were fantastic and we’ll always be grateful.”

Mark’s most bizarre fundraiser was a walk backwards from Arighi Bianchi to the Cat and Fiddle pub.

* To sponsor him visit justgiving.com/fundraising/Mark-Leah-Movember2021