Senior nurse Sue Milligan is the latest addition to the specialist East Cheshire Hospice team which provides patients with palliative care in the comfort of their own home.

Sue – known as Millie – has joined the charity’s Hospice @Home team as a sister after spending her entire career in health care.

That vast medical experience further strengthens a Hospice service widely acclaimed for its vital role within the Macclesfield community and beyond.

She assessed patients in community settings and advised on whether they met the criteria for continuing health care, a role which brought her into contact with the Hospice. 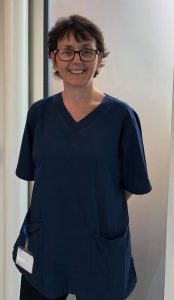 Sue Milligan who is part of the Hospice @Home team at East Cheshire Hospice.

Sue said: “The contact increased over the years and I was lucky enough to be involved in discussions to expand the Hospice @Home service. This was the catalyst to finally make the leap to become part of the team.

“I’m enjoying being part of the development and expansion of the service and the team have made me most welcome, just as they did  when on the end of a phone. I hope to make a small but positive difference here.”

Sue’s partner Iggy worked at Macclesfield District General Hospital as paediatric consultant for 16 years before retiring a couple of years ago.

The couple, who have three children, moved to Macclesfield 18 years ago when Sue switched from paediatrics to become a district nurse.

She later joined the hospital as part of the integrated discharge team, assisting patients to either access rehab units, return home, or stay in an appropriate community setting.

The Hospice @Home service has had a huge impact since it was launched in October, 2017, initially covering ‘out-of-hours’ and weekends before expanding early last year to cover 24 hours a day.

That collaboration is seen as key to the success of Hospice @Home which has been well received by patients, their families and carers.