The final delivery made by postman Robin Emery before retirement was a giant cheque for East Cheshire Hospice. The donation of more than £2,000 was his kind parting gift to the charity after 28 years on his  rounds in Macclesfield where he was a familiar face.

Robin’s final patch for the last eight years of his career was Gawsworth where he even held a farewell party to thank villagers for their friendship and support. Robin, of Hurdsfield, said: “For me the last eight years were probably the most enjoyable. Delivering in Gawsworth was a match made in heaven. The villagers and I just gelled, so it was almost a pleasure to go to work every day. 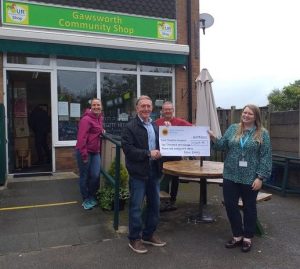 “I hosted a party with more than 150 invited guests and was overwhelmed with the support I was given.

“It wasn’t my first choice of career. I joined thinking it was a stop gap and I’d be there for six months and then some 28 years later I was still there!”

Party guests were invited to make a donation to the Hospice instead of retirement presents. Gawsworth villagers had earlier raised about £1,400 when Robin sportingly turned up for work in fancy dress as part of a charity initiative among postal colleagues.  Robin is still making plans for his retirement, but it will include more golf at Macclesfield Golf Club where he is a member. 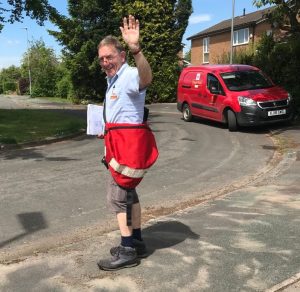 Waving farewell…Robin Emery who has retired after 28 years as a postman. Picture courtesy of Paul Woods.

He said: “I was 66 in August and it’s nice to have a lie-in after all those early mornings of getting up at 4.30 am and being in the sorting office at Jordangate at 5.30 am. I’d then walk nine or 10 miles a day on delivery.

“I felt it was the right time to call it a day, although I’ll miss the day-to-day contact with work colleagues and the village, but otherwise I’ve no regrets about retiring.

“I have no personal connection with the Hospice, but everyone around Macclesfield and the wider community really appreciates it.

“It’s based in Macclesfield and everyone has heard of it and knows what a fantastic job they do, so I wanted to put any funds raised towards the Hospice.”