Customers at the Macclesfield branch of Leek United Building Society were surprised when Veronica McNeil was strangely quiet one morning.

Veronica was taking part in a sponsored silence and raised £169 during a campaign by Leek United to help three charities, including East Cheshire Hospice.

The initiative by staff and customers across its 12 branches raised over £13,000, a total matched pound‐for-pound by the Society to just over £26,000. This therefore resulted in a donation of £8,681.12 to the Hospice as its share.

Veronica, from Macclesfield, said: “I can talk a lot and when my line manager jokingly asked whether I’d ever thought of a sponsored silence as my contribution I did ask him what he was trying to say.

“There’s no way I could have lasted a full day, so I did it for four hours. It was hard at times and I’m no good at charades which didn’t help.

“When customers said ‘hello’ I waved and Post‐it Notes came in useful.

“My colleagues Angela Ravenscroft, Debbie Swindley and Rukaya Sajid explained to customers what was happening and some generously made donations.”

A quiz, auction and endurance challenge were among other fundraising challenges in the group. Leek United is a regular supporter of the Hospice and makes donations through a savings scheme.

Home‐Start Staffordshire Moorlands and Treetops Hospice Care in Derbyshire were the other charities to receive donations from this latest initiative. 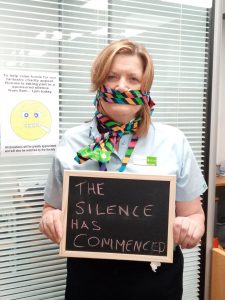