Macclesfield Town Council recognised his amazing efforts in raising around £330,000 for charity over more than 30 years.

Cllr David Edwardes, in one of his final duties as Mayor, presented the award at East Cheshire Hospice which has received more than £103,000 from John’s generosity.

The presentation was delayed because on the date it should have been handed over John was fundraising for the Hospice with the Stockport Accordion Club at Broken Cross Club. 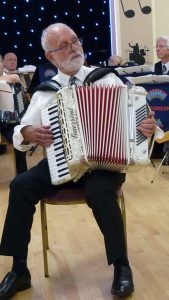 John Jones who has received a lifetime achievement award.

John was happy to give an impromptu performance at the Hospice when the honour was finally awarded.

He has also raised a similar amount for Macclesfield and District General Hospital, including more recently its intensive care unit where his wife June died two years ago.

He plays classic songs in the hospital’s cafe and waiting rooms and has performed over the years at the Sunflower Centre at the Hospice.

John said: “The award was a complete surprise and I was immensely proud to receive this civic honour for my fundraising for the Hospice and the Hospital.

“I also go busking by the ECHO shop run by the Hospice in Poynton raising money for charity. I get a lot of pleasure from playing my accordion, and making new friends.”