Caring for a dying patient changed the way Elaine Taylor thought about working in end-of-life care.

It was not long after she had joined East Cheshire Hospice last August that she visited a woman of similar age who had lost all her hair.

Elaine had spent 20 years looking after the elderly, ideal qualifications to work for the charity’s Hospice @Home team as a Health Care Assistant.

But that one patient, in particular, had a huge impact on Elaine. 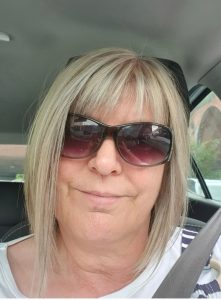 Elaine Taylor who is having her head shaved.

She said: “That lady had quite an effect on me.  She had children and a dog like me. She was really poorly, but so positive and when she passed away it really affected me.

“I’d never worked in that kind of end-of-life care before and it made me doubt whether I could continue doing that job.

“Was it too emotional? Was I strong enough to deal with it? Could I not care for people at end-of-life and see it for what it really is? I thought that could be me in that bed.

“But after a while to settle in, everything fell into place.

“It’s still sad and not easy at times, but you’re giving someone end-of-life care and a good death. We’re also there to support the family and ensure that person is pain-free. They know they’re being cared for and feel safe.

“It’s been a massive 10 months and I can’t ever imagine doing anything else. This will be it until I retire.

“The Hospice is amazing and it’s a privilege to care for patients like we do in the community.”

Elaine’s experience has inspired her to have her head shaved on July 2 to raise fund for the Hospice.

She said: “I could raise money other ways, but that wouldn’t mean anything to me personally. A head shave will because of that lady and others since then who had no choice whether they lost their hair.

“I’m doing this to support them and won’t be hiding away afterwards under a scarf or hat. I’ll explain this is what happens to people and hopefully they’ll sponsor me.

“I spend a lot of time and money on my hair and look after it. When I told my hairdresser I was doing it, she tried to talk me out of it and do something else, but then she realised how much it means to me.”