She will soon be introduced to a group of strangers with whom she will spend almost a year sailing around the world.

For the moment the identity of her fellow crew members in the Clipper 2019-20 Round the World Yacht Race remains a closely-guarded secret. 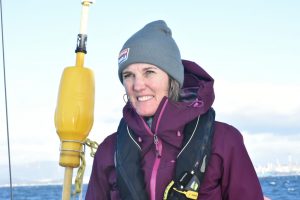 Heather, a landscape gardener from Disley, is raring to go on her daring adventure aboard a 70-foot ocean racing yacht.

Incredibly, she has already raised £10,000 for East Cheshire Hospice which cared for her late husband Adam (45) who died of cancer in 2013.

It is a quarter of the way towards her fundraising target, aiming to raise one pound for each of the 40,000 nautical miles travelled on her epic voyage, starting in August.

Mum-of-two Heather said: “I can’t wait to get going and am excited about going to sea, especially after undergoing a lot of training.

“A major challenge will be spending 11 months in the same confined area with complete strangers.

“Living in tight conditions will be as much of a test as the actual sailing and the next milestone in the countdown is when the crews are allocated on May 11.”

The UK departure port has also be to announced, along with several stops on a route via South America, South Africa, Australia, China and the USA.

Heather is sure life on the ocean wave will have more far more ups than downs. The 11-strong  fleet each has a professional skipper and mate supervising amateur crews of up to 20 per boat.

Heather is one of several sailors tackling all eight legs.

She added: “I’ve had extra training, including a week on a sailing course in Gibraltar, to gain more experience and background knowledge. I wanted to be as prepared as I can be for this extreme adventure.”

Proceeds will go to the charity’s Hospice @ Home service. Supporters are invited to a preview of Heather’s trip at Pinches Medical Centre in Macclesfield on May 16.

* To support Heather and read her blogs go to eastcheshirehospice.org/heather.