Adam played 72 holes in a single day at Shrigley Hall Hotel and Spa to raise funds for East Cheshire Hospice. 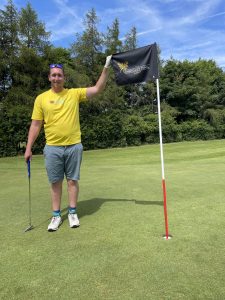 He teed off at 5 am and did not sink the final putt of his four rounds until 7.45 pm before dashing off for a meeting of his explorer scout group.

Adam joined around 70 fellow members in a Longest Day tournament organised by Shrigley Hall as part of its support for the Hospice.

The 18 handicap golfer, from Macclesfield, said: “I was glad it was a hot sunny day rather than wet and was tired towards the end after almost 15 hours on the course. The challenge took 44,281 steps to complete. 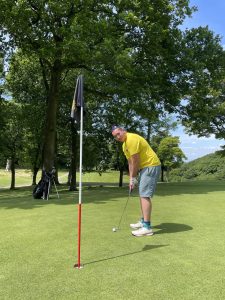 Adam Davies on his 72-hole marathon.

“I usually take on a sporting challenge for charity every year and when I found out the club was supporting the Hospice decided to walk and play 72 holes to raise money for them.

“My aim was to take fewer than 400 shots and thankfully only needed 388, losing eight golf balls in the process.”

After little rest, Adam was back at Macclesfield fire station early the next morning for his shift.

He said: ” I love being a firefighter and it’s a great job. It can be seen by some as brutal, but it’s very rewarding.”

The night before he played golf, he even led explorers from 1st Sutton St James’ on a seven-mile hike from the Cat and Fiddle pub back to their scout hut. Wife Rebecca Clulow and cocker spaniel Chester joined them.

Adam said: “I’m a busy person and like being busy. In fact, I hate sitting down so golf and walking is the best of both worlds for me.

“I played at Macclesfield as a junior and then fell out of love with the game before getting back into it, joining Shrigley in March. The course is in great condition and the green staff do an excellent job.”