Alison takes to the skies for East Cheshire Hospice

Home / Alison takes to the skies for East Cheshire Hospice

The bravery shown by her patients will act as a spur for Alison Arnold when she faces her own fears.

Alison will join other daredevils in a wing walk in aid of East Cheshire Hospice where she is a health care assistant.

Alison joins two other Hospice @Home team colleagues inspired to get involved with fundraising activities by the courage shown by the patients they visit.

Jo Helm undertakes a Sahara trek later this year, while Elaine Taylor is having a sponsored head shave.

Seeing how patients and their families cope with the challenges at end-of-life, supported by the Hospice, motivated them.

Alison, who joined the Hospice in January, said: “I’d worked in the community a lot with vulnerable people in different kinds of roles, but never with those at end-of-life.

“I just instantly connected with patients, realising that not long into my second week.

“Until then I’d always been a little bit frightened about death and when my dad Peter passed away in 2017, I didn’t understand the different stages he was going through with his cancer.

“There was no-one there explaining it to me, so wasn’t able to make such a good connection with him towards the end of his life.

“When I started working at the Hospice I was absolutely blown away by the dignity and respect paid to people at end-of-life and how we support them to have a good death.

“I just feel really proud to be working for the Hospice. It’s a privilege and humbling.

“Working with such caring and compassionate people, I felt settled the minute I entered the Hospice so it was important to me to try to do something.” 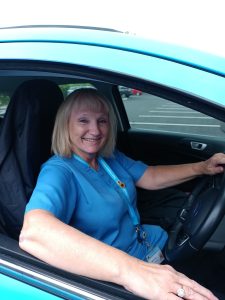 Alison Arnold who is part of the Hospice @Home team which goes out to visit patients.

Friend John Mycoe will be there to see Alison sit on top of a 1940s Boeing Stearman biplane over a  Gloucestershire airfield on July 11.

Alison said: “I’ve a fear of heights, so the first challenge for me is getting up the ladder to climb on to the plane.

“I’ve seen frightened patients facing their fears head-on in the latter stages of life and can’t know what that’s like, but this is my way of connecting with fear and trying to overcome it.