The newest recruit to the fundraising team at East Cheshire Hospice is the familiar face of Lisa Ball.

She rejoins the charity as Corporate Fundraiser two and a half years after leaving to travel the world.

Lisa had spent six years in various roles at East Cheshire and will focus on building up relations with the corporate world. 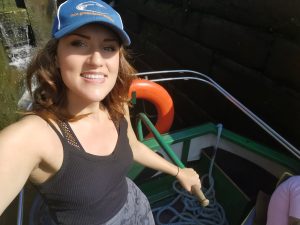 Lisa said: “I saw how corporate fundraising was developed when I was here before and am really excited by the challenge.

“We have a strong group of loyal corporate supporters and my aim is to further develop that  relationship with them and get more corporates on board.

“We have our 500 Club in which supporters pledge to raise at least £500 a year for three years and our annual Corporate Challenge when groups raise as much as possible in a month.”

Lisa rejoins from St Ann’s Hospice where she was Individual Giving and Legacy Fundraiser.

She is also back in a familiar domestic environment, having bought another canal boat to live on.

Lisa said: “I sold my first boat to go travelling and have bought another which I’m renovating. Boats can be a cheaper way of living and you’d think it’s quite cold, but it’s not and I’ve a wood burner to  keep warm.

“The boat is peaceful but there are more maintenance jobs to do, though my boyfriend knows how to fix engines and electrical systems so if I ever need anything he sorts it.

Lisa’s travels took her to Asia and Australia, spending four months in Melbourne where she worked for a sky diving club.

Lisa has completed more than 160 parachute jumps and is qualified to jump solo.

“I was at ground control for a sky diving drop zone, making sure everyone landed safely and the plane had a clear drop.

“The drop zone was next to an airport, so I had to make sure no other aircraft were coming through our area.”

Her best friend was involved in sky diving accident, though not on Lisa’s watch.

Lisa said: “She’s an experienced sky diver and instructor, but misjudged the wind completely and smashed her ankle, landing in the middle of a main road after her canopy clipped a lamppost.”

Thankfully, her friend has recovered and Lisa has enjoyed a safe landing back among the income generation team at the Hospice.