Grandfather Charlie Worrall took his family along for support on a demanding 10-kilometre charity walk.

Charlie, who is 89 in May, took part in a Pie and a Pint challenge in aid of East Cheshire Hospice. 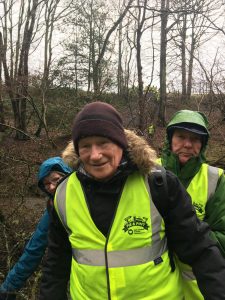 Charlie Worrall on his 10k walk.

Daughters Lynne, Vivienne and Dianne were with him every step of the way on the journey.

Conditions were so bad with wind and rain the Jack Russell preferred the warmth at home.

The family joined around 200 walkers who completed a stroll through the Cheshire countryside.

The Worralls were raising funds in memory of Charlie’s wife June who died in the Hospice five years ago, aged 80.

Charlie enjoyed a refreshing pint and a pie at the finish at Macclesfield Rugby Union Club where the walk had begun a few hours earlier. 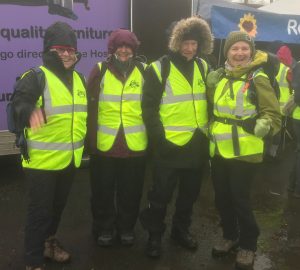 Charlie said: “I don’t drink generally, but must admit I was ready for a glass of lager and lime at the end  and certainly enjoyed the taste of the pie.

“I’m quite active and take Trudy for a walk every day, usually for about an hour.

“This was much further than I’d normally go and getting over the stiles and over the muddy puddles wasn’t easy. But it was nice that we could all do the walk together for a great cause.

“June spent the last five days of her life at the Hospice and was cared for with dignity and respect while she was a patient there.”

The couple, who have five children, were married for 61 years.

Vivienne was first to sign up for the walk, having raised funds for the charity before when she completed a walk around the UK and climbed Mount Kilimanjaro.

Once sisters Lynne and Dianne were persuaded to join her for this latest challenge, Charlie asked to join them.

The family have raised more than £1,500 in sponsorship, well over the initial target.

Lynne said: “We’re amazed how the total went up so quickly. People have been kind and generous and it was the thought that others were willing to help and donate that fuelled Charlie’s determination.

“We’re extremely grateful to everyone who has supported Charlie and the Hospice.”