An appearance on BBC news has led to a £10,000 boost in donations to East Cheshire Hospice.

The Hospice received 87 donations – almost half of them from first-time supporters – after a TV news report showing how the charity is coping during the coronavirus pandemic.

The donations came from as far afield as Nottingham, Scarborough, Sunderland and Shropshire with one donor from France.

Income Generation Director Rachel Allcock said: “The story of East Cheshire Hospice obviously touched hearts and we thank everyone for their on-going contributions from near and far.

“The BBC item showed the wider community the struggles facing the Hospice world, especially at this difficult time. It also showed the amazing care provided by our staff and the bravery of patients and their families.” 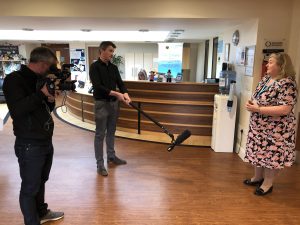 The report was shown on the BBC’s Six and Ten O’Clock News programmes shown to a global TV audience via its World News channel.

Ed said: “We were extremely grateful to the Hospice for allowing us to show what it’s like caring for patients at end-of-life during this pandemic.

“The Hospice wanted us to see the reality of their every day work – staff with coronavirus, patients unable to see families and worries over PPE and testing.”