The memory of Macclesfield Parish FC stalwart Col Smith lives on through an annual football match. Two teams he managed and played for – Parish FC and St Peter’s which are part of the same club – met in a friendly match at the Moss Rose. Parish FC came out on top 3-2, with a £320 donation made to East Cheshire Hospice from a collection.

Col Smith, who was a patient at East Cheshire Hospice.

He fought illness for 10 years but still remained involved in the club, part of the South Manchester and Cheshire Christian Football League. Col was a team leader at McDonald’s and a member of Bollington Life Church.

Parish FC manager David Mayers said: “We want to contribute towards society and not just play football. “The Hospice is a wonderful charity and they did a great job of looking after Col who was a real Christian man and passionate about his football.

“He inspired so many through his friendship, love for the game and deep Christian faith and is missed terribly.” 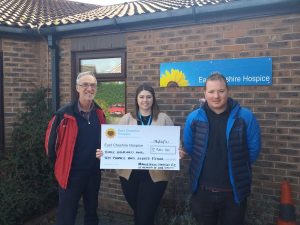