On 28th April 2019 Catherine Mather and Damien Lacey took on the ultimate running challenge in aid of the Hospice, The London Marathon. 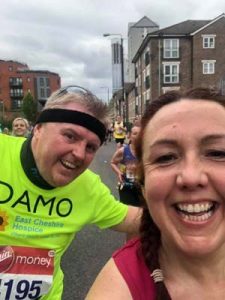 Damian is a Macmillan nurse and works closely with the Hospice. He also has a very personal connection with us after his mother-in-law was cared for here.

“I am  raising money for the East Cheshire Hospice. Linda stayed here for 6 weeks when she was first diagnosed and was critically ill. When it became apparent that we would be able to take her home she continued to visit the Hospice Sunflower Centre when she was well enough too, and enjoyed the support from staff and fellow patients.”

Damian started running about 4 years ago with a ‘couch to 5k’ challenge. He has come an incredibly long way and despite having a problem with his know at mile 16 which required physio, has now successfully completed the grueling 26 mile London Marathon! 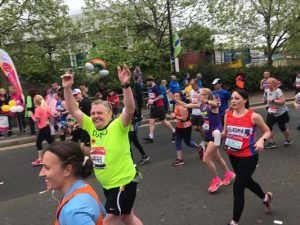 In 2016 Catherine Mather suffered a badly dislocated ankle and had almost a years absence from running. But she came back with a bang by successfully finishing the marathon in aid of the Hospice!

“I felt that it was really important to support a local charity and I chose East Cheshire Hospice because of the wonderful care and support they provide. I have friends who have had family members use the Hospice and I know how important it has been for them to have such valuable and crucial support.” 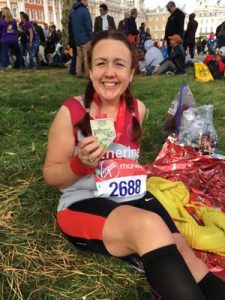