It was full steam ahead for Steve Nixon who combined a love of railways and running for a charity challenge.

He took part in races in locations known for their railway heritage in aid of East Cheshire Hospice.

Steve, from Tytherington, included the Bollington 10k and Macclesfield half marathon in his schedule to mark the 150th anniversary of a railway in Bollington.

The route between Macclesfield and Marple is now the Middlewood Way and this year’s Bollington Festival had trains as a theme in recognition.

Steve, a stalwart of the Macclesfield Model Railway Group,  also ran marathons in Manchester and Liverpool in honour of the line which operated the world’s first steam locomotive.

His itinerary featured the Great North Run and the Kielder marathon in the north east, birthplace of Robert and George Stephenson, regarded as the ‘Father of Railways’ and whose home Steve has visited.

Steve, who has raised more than £600, said: “I’ve supported the Hospice many times before and thought it’d be good fun to link my runs with railway history. Stephenson’s Rocket is such an important part of engineering history and I’ve enjoyed model railways since I was a boy.

“I did nine long-distance events in six months and achieved personal best times for a marathon, half marathon and 10k, but most importantly raised money for a good cause.”

The father-of-three works across Europe as an interim executive so his training runs take him far and wide.

* To support Steve go to justgiving.com/fundraising/stevenixon2019 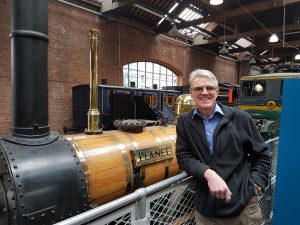