A lingerie brand set up by a Macclesfield businessman is helping East Cheshire Hospice in its hour of need.

Pour Moi will share half of sales from its new Charity Edit collection between four charities on the front line of the fight against Covid-19.

The company was founded by owner Michael Thomson in a tiny office above a Macclesfield shop 15 years ago. 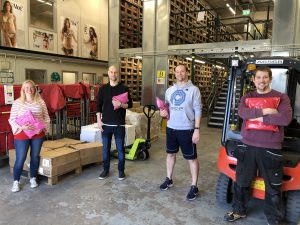 Pour Moi has a main distribution centre on the Hurdsfield Estate where staff nominated the Hospice for its Charity Edit offer featuring lingerie, swimwear, loungewear and sportswear.

Pour Moi is now a successful international brand but has not forgotten its roots and has launched a  #LetsDoThis campaign featuring staff showing Love Heart signs.

Age UK, Samaritans and RISE, a domestic violence charity in Brighton, where the company is now based, are the other charities to benefit.

Michael said: “These four charities do amazing work all year round but are now suffering from the double whammy of massive increased demand for their services and a dramatic drop in funding – both caused by the Covid-19 pandemic.

“Like lots of people, we were wondering what we could do to help the many vulnerable people in this time of urgent need and the Charity Edit collection is our response. It’ll provide much-needed funds for the charities in their greatest hour of need as well as help publicise the sterling work that each of them does.” 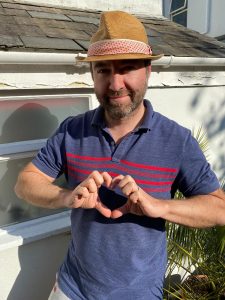 Michael Thomson, founder and owner of Pour Moi, with his Love Heart sign

Pour Moi has managed to carry on trading during the crisis, although it had to furlough around half its Macclesfield staff numbering more than 40 employees..

Head of Operations Rachel Kirk Lockley has personal experience of the Hospice after her father Alan died there in 2010.

Rachel, from Macclesfield, said: “My dad was a patient for less than a week and the care from the Hospice was excellent. It’s  such an important part of our community.”

The Hospice has estimated it will lose more than £1m in income after cancelling fundraising events.

Corporate Fundraiser Kate Bowmar said: “We’d like to thank Pour Moi and its staff for their generous gesture. The response from the corporate world and the general public during Covid-19 has been amazing and shows once again just how much the community cares for the Hospice.”