Friendly banter between pub regulars ended in a challenge match at pool with East Cheshire Hospice emerging the overall winners.

Decorator Tim Lyne and window cleaner Tim Larson were having a joke over a pint at the Brewers Arms, Macclesfield, about their abilities at the pool table.

There was only one way of finding out who had the best cueing skills so two teams were set up, each with eight players. 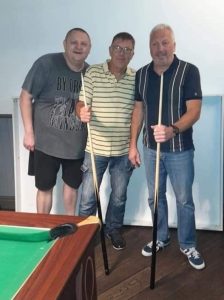 The team led by window cleaner Tim came out on top, with pub landlord Dave Wrench acting as referee.

Regulars sponsored the teams and donated raffle prizes, resulting in a £659 donation to the Hospice. The pub was already a supporter of the charity through its weekly prize draw. 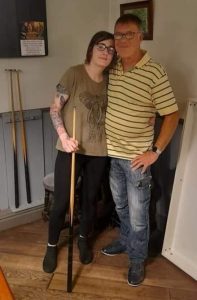 Regular Hannah Hewitt, nee Friel, whose husband Simon is a barman at the pub, said: “The two Tims were having a joke with a bit of winding up going on.

“It was Tim Larson’s idea to raise money for charity from the challenge. Everyone was up for doing it, especially as a lot of people at the pub have had family and friends treated by the Hospice over the years.

“The game should have taken place a couple of years ago, but because of Covid was delayed for a long time.”