Schoolgirl Philippa Wilson has just undergone a hair-raising experience – having her beautiful blond locks cut for the first time!

Even Pip’s hairdresser was anxious about using the scissors because she had never seen hair that long before. 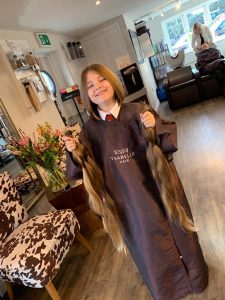 Pip with a reminder of her long hair.

The nine-year-old volunteered to face the chop to raise money for two charities, East Cheshire Hospice and Treetops Hospice.

Her friend’s mum Nicola Murrells was originally from Stoke-on-Trent and then lived in Prestbury. She died of cancer in 2018 and was cared for by East Cheshire Hospice.

Pip, a former pupil at King’s School, donated her hair to The Little Princess Trust as a way of helping other children.

Pip said: “I’ve never had a hair-cut and have always loved having my blonde hair super long. I’ve given my hair to The Little Princess Trust so they can make it into a long-haired wig. They’re really desperate for long hair. 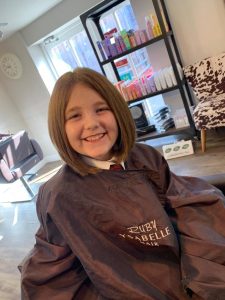 “I want to thank all my sponsors and the money raised will go to the Hospice’s childhood bereavement services.”

“My friend’s experience made me very aware just how important this help and support is to children who’ve lost their mummy.”

Pip’s mum Deborah said: “Pip’s so proud and happy she’s had it cut and is delighted with the result. She has no regrets and couldn’t stop smiling afterwards. Pip said it feels so light and swishy.

“Pip’s always been sensitive about her hair and that was her super power. It was quite a thing for her to have 27 inches of hair cut off, but she took it all in her stride.

“The hairdresser was more nervous than Pip. She said she’d never seen natural hair that long, never mind cut it all off.”

Ruby and her fiancé even donated £200, helping the fundraising top its £2,222 target.

Pip and classmates at her new school Denstone Prep undertook various challenges in aid of both hospices knowing they support families and children across Cheshire and Staffordshire. 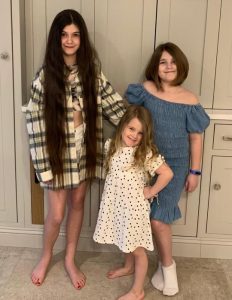 Meanwhile, Pip’s elder sister Elizabeth (10) is now contemplating having her long hair cut, while younger sister Beatrix (4) insists her hair stays away from any scissors, or even hair-clips!