Bell ringer Nick Jenkins has been tuning up for the next Christmas tree collection in aid of East Cheshire Hospice.

Weeks ago he was out and about in Bollington where he lives putting up banners and distributing leaflets.

Nick is an area organiser for the hugely successful collection scheme, now into its 22nd year. 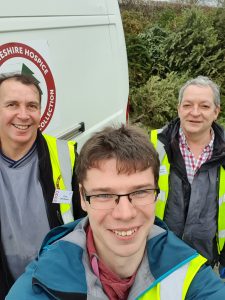 Like other volunteers, he will be riding round in a van picking up trees for recycling on the weekend of January 15/16.

Younger sister Suzanne will do the same, while their dad Graham is part of a fleet of drivers.

The family has been helping out with the tree collection for many years and they are also long-serving bell ringers at St Peter’s Church in Prestbury. 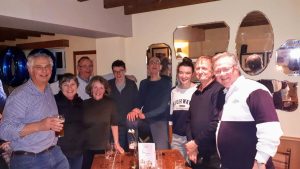 Nick said: “My dad’s been doing the collection since 2007 and I started a few years later when I was 16.

“I tend to target tree sellers with leaflets from the end of November. It’s the best place really to have a presence for when people are buying a tree, encouraging them to register for our collection.

“Everyone’s very appreciative of the work the Hospice does and some people save all their yearly donations to the charity for this one event.

“We also get people coming out to tell us about family members who’ve spent their last days in the Hospice and how grateful they were treated with such dignity and care.

“There’s a great camaraderie among volunteers and afterwards we end up sharing experiences with different crews over a pint at the Cock and Pheasant pub in Bollington.”

Nick, whose late grandfather Denis Grundy spent his final days at the Hospice, combines his job as a ramp agent with Jet2 at Manchester Airport with weekly bell-ringing duties.

“Some people come to bell ringing from a musical interest and others from a mathematical  background because it’s about permutations and combining  different numbers. There’s also a lot of physical effort involved.”

The event is sponsored by local businesses, including main sponsors AstraZeneca, so all donations go straight to the Hospice. To register trees visit www.echtrees.org.uk.