New to the team, Lindsey Rial

One of Lindsey Rial’s first engagements after joining East Cheshire Hospice was to attend a royal engagement with Prince Charles!

Wine and canapes were served to around 200 guests in recognition of their services to community pharmacy during the pandemic. 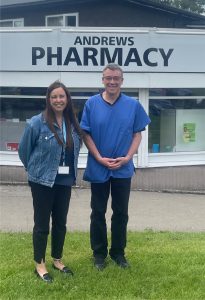 Lindsey Rial and Andrew Hodgson who were  royal guests as a thank you for their services to community pharmacy.

The inoculation programme at Andrews Pharmacy, on Kennedy Avenue, Macclesfield,  was one of the success stories of the mass vaccination roll-out.

It was one of the first three community pharmacies nationwide to start giving jabs 18 months ago  and has administered up to 200,000 doses since.

Up to 600 jabs a day were given initially as part of an operation involving more than 170 staff and volunteers. Nurses from the Hospice helped out at a time when their Sunflower Centre was closed.

Lindsey, who was then HR and business manager at Andrews, said: “It was a real thrill for Andrew and me to be invited. I was the only non-health care professional there – everyone else was a pharmacist or doctor.

“Working on the vaccination project was the highlight of my career and I don’t think I’ll ever top what we’ve done there, which had a great impact on the community.

“It is a massive achievement for everyone and not just the vaccination clinic. The pharmacy staff had to deal with 500 people a day walking through the door and at the beginning prescriptions were delivered to vulnerable patients told to stay at home. Our volunteers were a major part of that operation.”

Andrews still administers around 200 Covid jabs a day to the young and old. Lindsey is helping out there once a week initially before a full-time switch of jobs to the nearby Hospice.

“I felt I couldn’t go any further in that role and wanted to concentrate on my HR knowledge here at the Hospice.

“Working with the girls from the Sunflower Centre showed me what a lovely place this is and completely took away any stigma about Hospice care.

“It’s an opportunity I couldn’t miss and part of my role is looking at support for ward staff dealing with end-of-life care.

“That aspect can make recruitment difficult at times, but the nurses here will tell you it’s such a wonderful place to work. Our website lists vacancies and we’re always looking for bank staff.”