Music legend Noel Gallagher hit the right notes for East Cheshire Hospice by donating one of his treasured possessions.

His platinum disc for the iconic Oasis album Definitely Maybe was sold at auction for £3,750, with proceeds going to the charity.

Oasis fan Neil Bromley, from Prestbury, generously bought the collectors’ item at a party night held by Team Rainbow which raised a record £11,200.

The fundraising group – also known as Sarah’s Army – is a legacy to Carl’s Lamptey’s late wife Sarah who died in the Hospice in 2014. 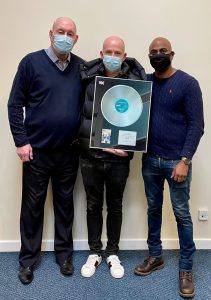 From left, Joe Corrigan, Neil Bromley with the platinum disc and Carl Lamptey.

Noel is friends with ex-Manchester City goalkeeper Joe Corrigan, a keen Hospice supporter, and donated the disc when he heard about the charity’s financial plight during Covid-19.

Carl, from Macclesfield, said: “Joe has been an amazing supporter and helped us get the disc. We’d also like to thank Noel for being so humble and kind and taking it off his wall at his studio in London when he heard about the charity’s situation.

“The party night in December almost didn’t go ahead because of Covid, yet we raised more than ever.  A special thanks also to Linda Longdon at Broken Cross Club for her amazing support.”

Carl is now planning an 80s night there in May as part of the group’s fundraising campaign.