A thriving Probus club which is just getting back to normal after Covid-19 has raised £1,700 for East Cheshire Hospice. The donation was made by club President Dr Gordon Archer on behalf of fellow members of The Second Macclesfield Probus Club. The funds were raised from his President’s Day last month which included a bowls tournament at Siddington Village Hall, won for the second year in a row by Ray Coyne. 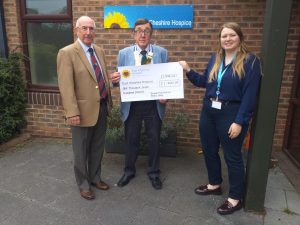 Dr Archer, a retired medical consultant, nominated the Hospice as his chosen charity. He said: “I’d like to thank all our members, relatives and friends for their generous support and we’re delighted to have raised this significant amount for such a worthwhile cause.

“I know from my long experience in the medical profession the vital role the Hospice plays in providing end-of-life care.

“Over the years some of our members have received that care and compassion from East Cheshire Hospice, which is an essential part of our community and relies heavily on donations to keep going.”

Club members were able to get together again last week for the first time in almost 18 months. Meetings are held on the third Wednesday of each month at St. Thomas’ Church Hall, Henbury, but have been taking place online during the pandemic.

Club secretary David Potts – himself a past president – said: “We have more than 50 members and had a good turnout for our Zoom meetings. “It wasn’t quite the same, though, as getting together again when we made sure we took strict Covid precautions.”

David, a retired civil servant, helped set the lottery at the Hospice in 1995, a task which included door-to-door visits to recruit members.

He became lottery manager for a while, helping make the scheme the success it still is today. The lottery funds three days of care each week in the charity’s Sunflower Centre.

The group was founded in 1992 by members of the original Macclesfield & District Probus club, hence the use of the word Second in the club title.

The club is open to retired professional and business people and has an active social side involving  wives and partners. Probus has a keen walking group, plus bowling and bridge sections.