Football may have been kicked into touch during Covid-19 but Macclesfield Town Ladies are still very much in action.

The squad are well on their way to completing a virtual challenge of walking, cycling or running from Lands End to John O’Groats – and back again!

Initially the team had planned to travel the length of the country during May but reached half way within the first few days so doubled the distance to 2,814 kilometres.

Macc Town Ladies are raising £750 for East Cheshire Hospice since the usual fundraising events have been called off.

Vice captain Becky Rowbotham said: “Like most football clubs our season was cut short in March due to the coronavirus pandemic.

“We hope to start playing again in September, depending on the current situation, and wanted to put our pre-season training to good use.

“We were inspired by the Hospice to raise funds for them after hearing how they’ve been affected by Covid-19. The players were all excited by supporting such a good cause.”

Becky is a key worker like some of her team-mates so they have had to juggle the challenge around work. A fitness monitor record the distance covered.

The open age team was reformed three years ago and were well placed in the Championship Division 1 of the Cheshire Women’s and Youth League until the season ended early.

The team play on Back Lane, Congleton, because they have been unable to find a suitable pitch in Macclesfield.

* To sponsor them visit justgiving.com/fundraising/macclesfield-town-ladies-fc-may-challenge. 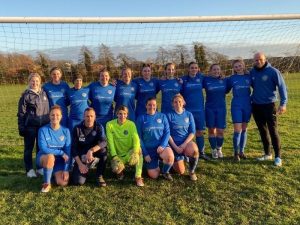 Macclesfield Town Ladies who are undertaking a virtual challenge.