A simple sunflower seed has led to a thriving fundraising venture for Joan Edwards to honour her son-in-law’s memory.

When Liam Ward was in the care of East Cheshire Hospice in 2018, his wife Michaela bought a packet of seeds from the Hospice reception area.

Liam died of sarcoma, a rare form of cancer, aged 34 and the sunflower is the Hospice emblem.

Joan has grown the sunflowers in her greenhouse since her daughter gave her the seeds, raising £810 for the Hospice in return for a £1 donation for each flower.

Joan said: “Michaela isn’t green fingered and asked me to grow them. It started as a bit of fun between the family and grandchildren.

“I took the seeds from the head of my biggest sunflower and dried them over the first winter before planting them again and selling 450 last year.

“It wasn’t quite as popular this year, but it doesn’t make any difference how much, or how many. It’s my way of giving back to the Hospice for what they did for Liam and the help they gave him, Michaela and their two boys.

“I advertise on Facebook and lot of people buy them who’ve probably faced a similar situation in their lives. It’s become popular and friends now look forward to it each year.” 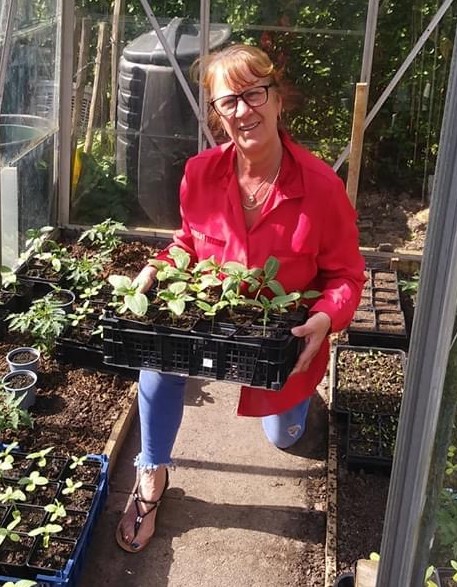 Joan Edwards at home in her greenhouse.