Hiking 88 hills in the Peak District

Hiking up 88 hills in the Peak District in record time was always going to be a tall order for Lucy Coppack.

Especially when she dislocated her knee near the end of a challenge undertaken in memory of her mother Lynne. But Lucy was on top of the world after completing her epic tour of trig points in the space of 85 gruelling days.

She raised more than £8,000 for East Cheshire Hospice which cared for her mum 25 years ago. The last leg of her adventure was the path up to Shutlingsloe, which has sentimental value for the Langley family. Lucy’s mum, a landscape architect, designed the route to the summit and her dad, a council ranger, partly built the path.

Lucy was a toddler when Lynne (38) died of breast cancer. 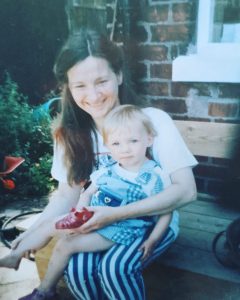 Lucy with her mum Lynne.

Lucy said: “I had mixed emotions when I reached the top at Shutlingsloe. I was so happy that I’d finished my challenge and I was so tired, aching and exhausted. 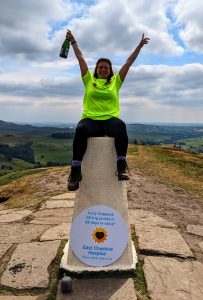 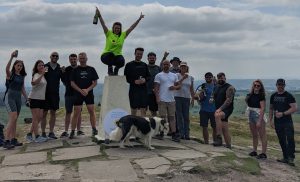 Family and friends meet Lucy at the top of Shutlingsloe.

“I was ecstatic to reach my fundraising target a couple of days later too. It felt amazing to give something back and achieve something so special and which I’ll always remember.”

Lucy had set out to raise £7,500 – the equivalent of the cost of a day’s care at the Hospice – and donations went up after she featured on BBC regional television.

Lucy said: “I had a lot of support from family, friends and met so many amazing new people along the way which is something I’ll cherish forever.”

She was even laid up for 12 days with a dislocated knee, an injury suffered  jumping off a wall in darkness after visiting four trig pillars in one day near Bakewell.

Lucy said: “When I landed and knew I’d dislocated my knee. I could feel it was out of place and was in a lot of pain. I had to pop it back in myself and get to safety.

“I went straight to hospital and had a brace for a few days and then a support.  That put me massively behind and I ended up having to fit in 22 trig points in the last two weeks of the challenge.”

Lucy, a financial services coach with Royal London, has not had much of a break – she was soon back climbing Helvellyn in the Lake District.

To donate to her trig challenge visit justgiving.com/fundraising/lucy-coppack1.