One of the country’s most popular races included runners who put their best foot forward to raise funds for the East Cheshire Hospice.

The sponsorship pennies are still rolling in, but East Cheshire Hospice runners are expected to raise around £4500 by taking part in this year’s Simplyhealth Great Manchester Run through the streets of central Manchester.

Runners included 16-year-old Joseph Sankey from Ullswater in Macclesfield who has raised well over £1000 on his own. Joseph wanted to support the hospice for taking care of his godfather, Neil Robinson, who passed away at the Hospice in March aged 53.

Joseph, who’s currently sitting his GCSE’s at All Hallows Catholic College, finished in just over 50 minutes, coming 117th in his age group from around 30,000 runners.

“I had much more energy than I thought I would have,” says Joseph. “The atmosphere was amazing – music everywhere and crowds chanting your name.”

Joseph trained for the run in between his exam revision and says that the running may even have helped with his studies.

“I got into a routine where I studied for a bit and then cleared my mind with a run, then back to studies again,” he said.

Joseph crossed the finish line almost four minutes ahead of his father, Ian, who he persuaded to do the run with him. Mum, Lynsey, was also there to cheer him on at the finish line alongside Neil’s wife, Sarah, and daughter Rebecca.

Also a few minutes behind was 38-year-old Saxon Whittle who was part of the six-strong team from McCann Complete Medical.

Completing in a time of 54’ 55, Saxon believes the crowds played a major part in helping him get to the finish line.

“I really wanted to challenge myself and get fit enough to run a 10K but I wasn’t sure I could do it,” he says. “But the crowds just spurred us all on.”

“Our heartfelt thanks go to everyone who pounded the streets to raise money for us,” says events assistant at the Hospice, Beth Candy, “All the services we provide at the Hospice are free, and to continue to do this we need to raise £345 per night per patient so every penny raised will go towards supporting our work.” 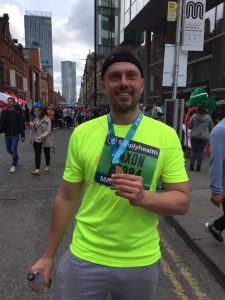 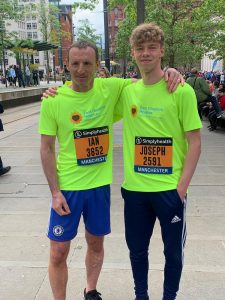