Kind-hearted runner Finley Foote has set a fast pace as he chases an ambitious £10,000 fundraising target. His total already stands at an impressive £7,000 – an amazing achievement for the Bollington schoolboy who became a teenager several weeks ago.

Finley sprang into action 18 months ago when the first lockdown forced East Cheshire Hospice to cancel several fundraising events, including a Splash Out day his family had intended to take part in. When Finley heard about the charity’s plight, he ran two and a half miles every day to raise  sponsorship while his school was shut. Many others members of the community also undertook similar fundraising challenges, generously helping out the Hospice. 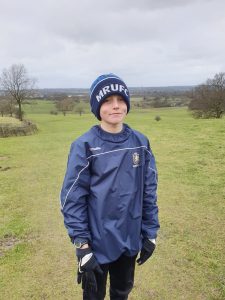 Finley Foote on one of his runs.

Except that Finley has never stopped running or raising funds since, rarely taking a day off from exercise and clocking up 848 miles in the process. He has long since returned to Tytherington School where teachers and class mates have supported his efforts.

Finley received a Macclesfield Mayoral youth commendation for his community contribution after a nomination by teachers. He is also due to receive a similar civic award in Bollington. 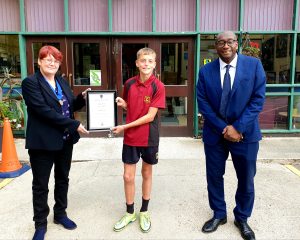 Proud mum Sarah said: “Finley was self-motivated to go out and do the fundraising himself. I also think the running helped his mental health during lockdown because he’s so active and was gutted that all his sport stopped.

“It was his way of keeping himself going and now he’s decided he wants to raise £10,000 for the Hospice.

“He ran every day during both lockdowns and decided himself that he’d run again when he couldn’t go back to school after Christmas.

“It has required a lot of stamina, especially with all the sport he plays, and he’s been out running even if he’s not quite felt 100 per cent.

“Finley still goes off and does his runs and is keen to enter some organised runs to keep trying to raise more money.

“I’m also proud that he’s aware people have already given him money for the fundraising and so he can’t keep asking them. He’s sensitive to that and realistic and knows a lot have sponsored him. ”

Finley, and friend Matty Dowd, were among the youngest to tackle a gruelling Tough Mudder last month, and thanks to more donations, the total is creeping up. 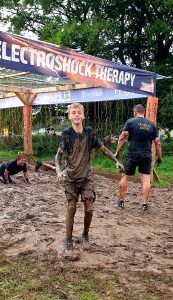 Finley taking part in a Tough Mudder to raise funds.