Volunteer Elaine Unthank has a heart of gold after spending most of last year organising collections for East Cheshire Hospice.

She took up the challenge in memory of her brother Darren Harper (49) who died of sarcoma cancer in the Hospice in November 2016. 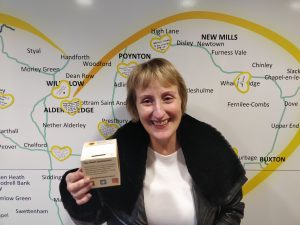 Darren worked at Spectus Windows in Macclesfield for more than 25 years.

Elaine, who helps at the charity’s shop on Chestergate, raised £4,191.79p from the collections which involved distributing cardboard boxes to countless businesses and households.

A further £559 was raised from a raffle as Elaine kept a promise to her brother that she would support the Hospice during its 30th anniversary celebrations as a thank you for helping him.

Elaine, from Macclesfield, said: “I was very close to my brother. He was a true gentleman and during his time as a Hospice inpatient, told me he wished he could have done something for them.

“I told him not to worry and promised to help the charity for their fantastic care. The nurses there loved him.

“The Hospice wouldn’t be here without such donations. It helps patients cope with their pain and supports the families.

“I also want to say a massive thank you to everyone who donated through the raffle and collections. It wasn’t easy and a lot of hard work but well worth it.

“I’d like say a special thanks to the Co-op, B&M, and everyone at the Plough Inn.”