Thrill seeker Andrew Hine admits roller coasters will never quite be the same again after a daring wing walk. The father-of-two even went up in the air twice so he could perform loop- the-loops on his second attempt. He joined other daredevils at an airfield in Gloucestershire, all of them raising funds for East Cheshire Hospice. The flights were on top of a classic 1940s Boeing Stearman biplane. Andrew, from Upton Priory, honoured the memory of grandfather Norman Wilcox who died in the Hospice in 1995. 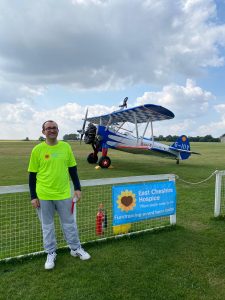 Andrew, a support worker for adults with learning difficulties, said: “I’ve never experienced anything like it before and the days of Alton Towers and Blackpool Pleasure Beach might not be quite as exciting any more.

“I know it was a once in a lifetime opportunity, but when I saw they only do upside down from a second wing walk I couldn’t resist. “I’ve not been spending a lot of money during lockdown so thought I’d treat myself and it was a fun thing to do and a great adrenalin rush. “The pilot managed to do a few aerobatic manoeuvres, including a couple of stall turns and two loop-the-loops. It was a brilliant day. “The most daring thing I’d done was a sky dive 15 years ago and to some it would have looked terrifying and the worst thing you can possibly imagine, but for me it was exciting.” 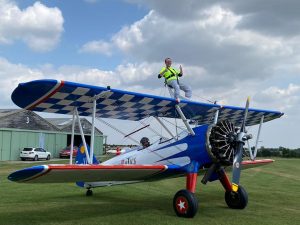 Wife Lahdan was there to witness Andrew’s aerial acrobatics. To sponsor him visit justgiving.com/fundraising/andrewhine

The oldest participant was Hospice volunteer Barbara Spivey who, at 74, was one of several grandmothers who undertook the challenge.

Bethan said: “It was an amazing day and a different kind of fundraising challenge and we’d like to thank everyone for taking part and raising funds for the Hospice.  Everyone had a great time and hopefully we can arrange another wing walk.”