Runner Damian Lacey has both professional and personal experience of the care offered by East Cheshire Hospice.

As a Macmillan nurse he is part of the support network which provides end-of-life palliative care for Hospice patients.

Damian’s mother-in-law Linda Tute was a recipient of that care before her death from oesophageal cancer last September, aged 75.

The family were so grateful for the way Linda was looked after that Damian is raising funds for the Hospice by competing in the London Marathon on Sunday, April 28.

It is Damian’s first marathon and when Sir Andy Murray fires the starting gun for the field of 42,000 it will complete a remarkable journey. 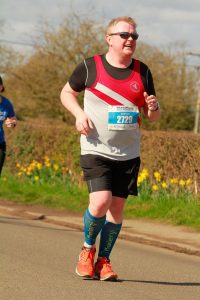 The Macclesfield Harrier said: “I only started running just over four years ago and it was a case of couch to 5k for me. Then I couldn’t run 10 feet never mind 10 miles.

“Linda used to joke about my figure and now she’s having the last laugh because I’m running the marathon.

“Perhaps it was fate that my application was accepted after missing out twice in the ballot, because the letter telling me I was successful arrived on the day of Linda’s funeral in October.”

Linda and husband Martin ran a grocery business in Bollington before retiring. Martin is a member of Macclesfield Male Voice Choir and a former Pott Shrigley Cricket Club player and both organisations have rallied round to support Damian, along with wife Sheona and sister-in-laws Kerry Tute and Meryl Goodwin.

Damian, from Tytherington, is part of the Macmillan Specialist Palliative Care team at Macclesfield Hospital.

He added: “We work in close collaboration with the Hospice even though we’re separate organisations. I know about the Hospice services professionally but when Linda was on the receiving end it gave me a different perspective.

“She was an inpatient and was also one of the first to access the Hospice@ Home service set up 18 months ago.”

* To sponsor Damian go to https://www.justgiving.com/fundraising/damian-lacey