Co-op customers can now help people in Macclesfield with dementia every time they shop.

East Cheshire Hospice is putting proceeds from its Co-op Local Community Funding towards its dementia services.

It means that that one per cent of what Co-op customers, who are also members, spend on own brand products goes straight to the charity.

The latest partnership between the store and the charity runs until next October. The Hospice is hoping supporters become members before their Christmas food shop.

The Hospice has already received almost £8,000 from Co-op shoppers since the scheme was introduced more than three years ago.

The most recent round of funding generated £3,763 which was allocated to its Childhood Bereavement Service.

Co-op stores at West Park Drive and Westmorland Close are supporting the Hospice as their nominated charity, although individual members can choose which charity benefits from their  one per cent donation regardless of where they shop.

The Hospice has received widespread praise for its approach towards dementia and operates a Companion Service and Carers Programme.

Admiral Nurse Debbie Callow said: “We’re delighted the Co-op funds will support such a vital service.  The aim of the fund is to help pay for local projects Co-op members care about and through their support at the tills we can continue to address the growing needs for those living with dementia and their families.”

“Our dementia services offer a safe, relaxed environment where carers in East Cheshire can come together in a group setting to share problems, concerns or experiences with others who are going through a similar experience.

“Our services also provide people affected by dementia with a regular volunteer companion to support social activities in order to give the person they live with some respite.”

* Any Co-op member can support the Hospice through their shopping providing they have chosen to support it through their membership account. (www.coop.co.uk/membership). 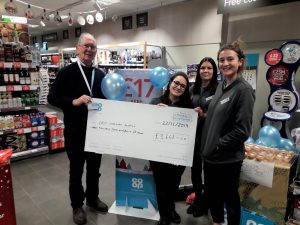