Two brothers attempting to canoe across the country are hoping to learn from celebrity Jordan North after his similar adventure.

The BBC Radio 1 DJ rowed 100 miles from London to his home town Burnley, via an elaborate network of canals, in aid of Comic Relief.

Tom and George Bentham, from Macclesfield, will instead paddle a canoe and travel from west to east for their nine-day voyage covering 184 miles. 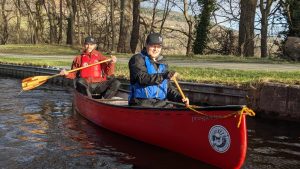 The pair are aiming to raise £15,000 for East Cheshire Hospice and Macmillan which cared for their late father Mark.

The Benthams have begun training for their Canoe Against Cancer trip in September after buying a second-hand vessel for £850.

Work and family commitments have so far limited the amount of time the pair have spent together in the canoe.

So, too, the fact George lives in Halifax, although the pair undertook a 10-mile trial along the Macclesfield Canal. 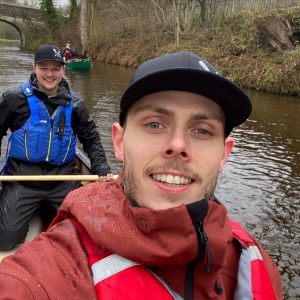 Tom Bentham (front) and George getting in paddling practice.

Tom said: “The stormy weather didn’t help, but we’ve done a lot of training separately in the gym and we’ve a lot of time to build up our fitness.

“The first time we got in a canoe we had a day of coaching from an instructor in Wales who went through all the techniques with us.

“That highlighted that it’s a technical challenge, as well as physical, because going in a straight line is easier said than done.

“It’s not what either of us expected and once when we tried to manoeuvre sideways we made a mistake of leaning over too much and almost capsized.

“Having said that, the canoe is quite stable. The crucial thing for a two-man crew is to be synchronised.

“We’ve seen Jordan North’s rowing trip for Comic Relief and hopefully we’ll get a few tips from him and can liaise over the challenges of travelling under your own power through the canal network.”

Tom and George are looking for sponsors and are also holding a raffle as part of their fundraising.

Their coast-to-coast journey begins at Glasson Dock, near Lancaster, and goes to Merseyside before Manchester, Huddersfield, Wakefield and the Humber.