Judy Kelly was a proud grandma when Milly and Eve Farrer set up a cake stall outside her home. The girls raised £217 for East Cheshire Hospice where Judy has been a volunteer for almost 21 years. 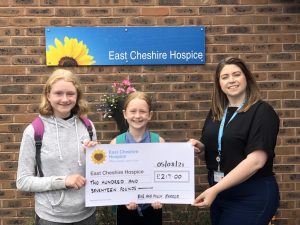 Her granddaughters were on a week-long visit from their Birmingham home during the school holidays when they decided to help the Hospice.

Milly (10) baked cakes, while 14-year-old Eve organised a raffle with 20 prizes which raised £73 towards the total.

Judy said: “Milly loves cooking and has her own recipe book of cakes she makes.  Friends and neighbours were so generous and kept coming forward with raffle prizes. 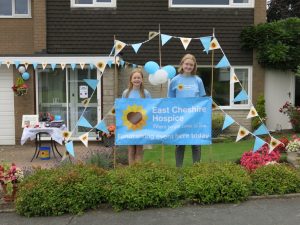 Milly (left) and Eve at the cake stall outside their grandma’s home.

“We were amazed by the success of the afternoon and the girls were so pleased. It was a bit worrying because Milly had made a lot of cakes and I thought what if no-one comes, but we sold them all in two hours.

“Milly had posted flyers and the next day wrote thank you notes to all friends and neighbours who had supported them.”

Judy is soon hoping to return to her long-serving voluntary role on the Hospice reception. Covid-19 also prevented her and fellow volunteers from helping display flowers on the ward, a role she has done for 10 years.

She said: “Not being able to volunteer has been awful and I’ve hated it. During that time I have, though, been fundraising by painting greetings cards and selling them to friends, donating the proceeds to the Hospice.”