Running like a rocket is the aim for one East Cheshire Hospice supporter embarking on his own amazing 3,2,1 challenge – three marathons, two half-marathons and a 10K during 2019.

Steve Nixon, 56, from Tytherington, has nicknamed his challenge “Stephen’s Rocket” as inspired by Stephenson’s Rocket – the locomotive designed by Robert Stephenson almost 190 years ago in October 1829.

As a railway lover, Steve is hoping the rocket theme will inspire him to do great times on his running challenge.

“My enjoyment of running started about six years ago when the Hospice gave me a place in the London Marathon and since then I just keep doing more and more,” says Steve. “This year I decided to up the ante a little and take on more than I’ve ever done.

“I’ve now done two marathons – in Manchester and Liverpool – and also the 10K Great Manchester run and next up is the Bollington 10k in August which runs along the old railway line.”

Then in the autumn Steve stays at home for the Macclesfield Half Marathon in September before heading to the North East, where appropriately George Stephenson, renowned as the “Father of the Railways”, and his son, Robert, were born.

The Great North Run half marathon in September – described as the world’s biggest run with 60,000 runners – will be followed by what Steve feels will be the hardest of all his planned events at the picturesque but hilly Kielder Marathon in October.

Careful observers will note that Steve is already in line to smash his planned 3,2,1 challenge as, if he completes all his races, he’s added an extra 10K on to his total.

Steve, an interim executive, travels throughout Europe with his job and finds he can fit in lots of running whilst staying away.

He says: “I’ve got plenty of time in the evenings when I’m away to train so it works well”.

And what does his wife, Beverley, and three children think of his running challenge? “They think I’m an idiot but know I love it,” he laughs.

To support Steve his fundraising site is https://www.justgiving.com/fundraising/stevenixon2019 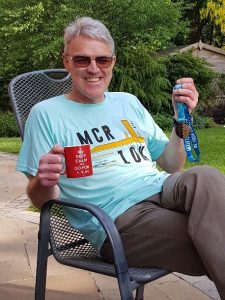 Help us to protect our patients, staff & volunteers.

East Cheshire Hospice care for people with life-limiting illnesses so it is important in the current and ever changing Coronavirus situation that we take all reasonable steps to protect the wellbeing of those using our services, our staff and volunteer.

Find out more information and advice about visiting the Hospice at this time.

We use cookies to ensure that we give you the best experience on our website. If you continue to use this site we will assume that you are happy with it.OkPrivacy policy