Now the Disley mother-of-three has been pounding the streets raising funds for the patients she cares for.

Charlie joined fellow fundraisers on a Hospice to Hospice hike – from St Rocco’s in Warrington to East Cheshire in Macclesfield. 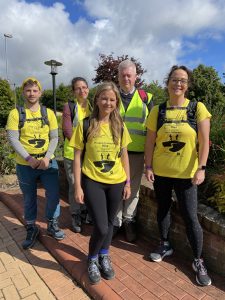 Hikers (from left) Richard Laverick, Anna Hazel and Andrew Dethick, all teachers at The Macclesfield Academy, with Rebecca Markwick and Charlie Guerin (centre).

The 26-mile walk took eight hours, while others covered half that distance from Knutsford and St Rocco’s supporters went the opposite way.

Charlie is a bank nurse at East Cheshire, having been a ward volunteer originally.

She is in her second spell at the Hospice as a qualified staff nurse, having also worked at The Christie and the local hospital.

Charlie said: “There are few places on earth that do to you what the Hospice can. I remember walking in as a volunteer thinking this is not going to leave me. This is in me now – it runs in your veins.

“When I came back to work one day a week in January and it was like coming home. It’s the values of real nursing and why I set out to be a nurse.

“You’re also aware it’s a charity and has suffered a huge loss of income because of Covid and this was my opportunity to help.

“Working here gives me a privileged perspective which many people don’t get to witness.”

Husband Nick, along with Alby (9), Isla (6) and Sonny (3), greeted Charlie after her exhausting walk.